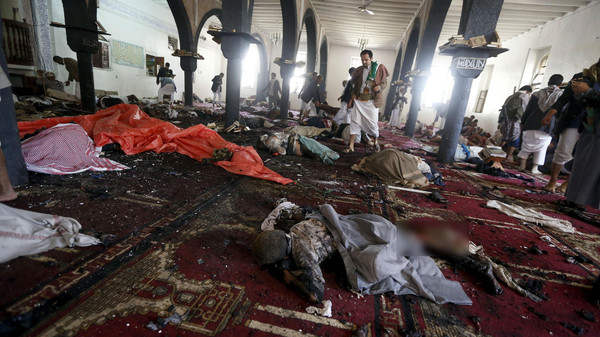 Bodies of people killed in a bomb attack lie in a mosque in Sanaa March 20
Share:

A group claiming to be a Yemeni branch of the Islamic State group says it carried out a string of suicide bombings in the Yemeni capital, Sanaa, that killed a total of 137 people and injured 345 others.

The group posted an online statement saying that five suicide bombers carried out what it described as a “blessed operation” against the “dens of the Shiites.” The bombers attacked the Badr and al-Hashoosh mosques, located across town from each other, during midday Friday prayers.

The claim, posted in an online statement, could not immediately be independently confirmed and offered no proof of an IS role. It was posted on the same website in which the Islamic State affiliate in Libya claimed responsibility for Wednesday’s deadly attack on a museum in Tunisia.