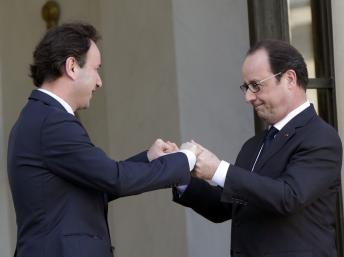 Assad not credible partner in fighting IS, Hollande at meeting with Syrian opposition chief
Share:

Syrian President Bashar al-Assad is not a “credible” partner in the fight against the Islamic State (IS) armed group, French President François Hollande said Thursday after meeting a Syrian opposition leader. Iran’s ambassador called for France to adopt a “more realistic” approach to fighting IS.

Assad “is the main cause of his people’s suffering and for the rise of terrorist groups in
Syria”, Hollande said after meeting Syrian National Coalition leader Khaled Khoja in Paris on Thursday. “He is therefore not a credible interlocutor to fight Daesh [IS] and prepare Syria’s future.”

Khoja took over the National Coalition’s leadership in January and this was his first meeting with Hollande.

Before meeting Hollande, Khoja told the AFP news agency that he was seeking to establish “common ground” with other Assad opponents, including groups tolerated by the regime, an initiative that Hollande welcomed.

And he said that he was ready to enter negotiations with the government even while Assad stayed in place, although the president’s departure remained the opposition’s goal.

The National Coalition was established in Doha in 2012 and has twice tried unsuccessfully to negotiate with the Damascus government.

Iran’s ambassador to France called on Paris to change its line on talking to Assad, after a much-criticised visit by French MPs to Damascus last week.

France should be “more realistic in relation to the reality in Syria”, Ali Ahani told Europe 1. “You must think of the Syrian people and not tear this country apart.”
RFI