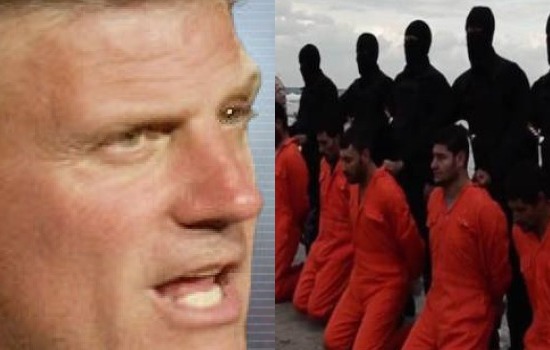 The Islamic State beheaded 21 Egyptian Christians over the weekend, propping the severed heads on the victims’ backs, a barbaric slaughter that led Reverend Franklin Graham to ask, “Can you imagine the outcry if 21 Muslims had been beheaded by Christians?”

“Where is the universal condemnation by Muslim leaders around the world?” he asked.

The brutal killing of the 21 Egyptian Coptic Christians, who had been abducted in Libya by members of the Islamic State, was videotaped and the entire death film was posted online on Sunday, Feb. 15. It is entitled, “A Message Signed With Blood, To The Nation of the Cross.”

In a Facebook post on Feb. 16, Rev. Graham, who heads the Billy Graham Evangelistic Association, said, “The militant Islamic terrorist group ISIS has released a video called A MESSAGE SIGNED WITH BLOOD TO THE NATION OF THE CROSS showing the beheadings of the 21 Egyptian Christians who had been kidnapped in Libya.”

“Can you imagine the outcry if 21 Muslims had been beheaded by Christians?” said Rev. Graham. “Where is the universal condemnation by Muslim leaders around the world?”

“As we mourn with the families of those 21 martyrs, we’d better take this warning seriously as these acts of terror will only spread throughout Europe and the United States,” warned Rev. Graham.

In a statement published in their propaganda magazine, Dabiq, theIslamic State said that in the murder of the 21 Christians it is “important for Muslims everywhere to know that there is no doubt in the great reward to be found on Judgment Day for those who spill the blood of these Coptic crusaders wherever they may be found ….”

The Dabiq article accuses the Copts, an Orthodox Christian minority dating back to the first century church, of being followers of Pope Shenouda III – head of the church from 1971 until his death in 2012 – and of “the taghut [idolator] Sisi,” a reference to President Abdel Fattah el-Sisi, who is also reviled by Islamists.

In addition to his work at the Billy Graham Evangelistic Association, Franklin Graham, son of world-renowned evangelist Billy Graham, is president of the international relief group Samaritan’s Purse. Rev. Franklin Graham frequently speaks out against the dangers of radical Islam and sharia (Islamic law).