2 Syrian refugees who disappeared from Lebanon are at risk of torture: HRW 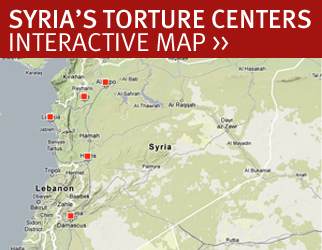 Beirut , Lebanon- The Human Rights Watch issued a report on Tuesday in which it said that 2 Syrian nationals who were in Lebanese custody are feared to have been deported to Syria in violation of the Convention Against Torture.

The families of Osama Qaraqouz and Bassel Haydar said the two men were transferred to General Security’s custody in October and November last year, after serving short prison sentences for security violations.

But there was no information over their whereabouts after the transfer, which raised fears that they might have been forcibly handed over to Syrian authorities, HRW said stressing that the Lebanese authorities need to come clean about what happened to these two men.

Here is the complete report of the Human Rights Watch :

Lebanon’s General Security, the country’s security agency in charge of foreigners’ entry and residency, has refused to disclose what happened to the men, Osama Qaraqouz and Bassel Haydar, despite repeated requests for information from their relatives and Human Rights Watch. Their families fear that General Security deported them back to Syria and into the custody of the Syrian government. General Security’s concealment of the fate or whereabouts of the two men could amount to the crime of enforced disappearance.

“The Lebanese authorities need to come clean about what happened to these two men and whether they were sent into the hands of a government that is likely to torture them,” said Nadim Houry, deputy Middle East and North Africa director. “Refusing to disclose their whereabouts denies the men basic protections and makes the Lebanese authorities complicit in any harm that comes to them.”

Relatives and friends of the two men separately told Human Rights Watch that they feared they were forcibly returned to Syria after being transferred to General Security custody from Roumieh prison, where they were serving short sentences for security related offenses, despite their fear of detention and torture by the Syrian authorities.

The Interior Ministry, which oversees General Security, and the judiciary should investigate General Security’s practices and penalize officers responsible for any enforced disappearances or forcible deportations to Syria, Human Rights Watch said.

Lebanese authorities have repeatedly affirmed their commitment not to deport any Syrian to Syria. As a party to the Convention Against Torture, Lebanon is obligated not to return or extradite anyone if there are substantial grounds for believing the person would be in danger of being subjected to torture. Nevertheless, General Security recently forcibly deported at least one Syrian who also had just finished his prison sentence and who was subsequently detained by Syrian authorities. Foreign inmates are transferred to General Security, which is in charge of foreigners’ entry and residency in the country, for processing after serving any prison term.

Haydar’s brother told Human Rights Watch that Lebanese armed forces arrested Haydar in Arsal in April and that a military court sentenced him to four months in prison in Lebanon for “selling weapons” and “illegal entry.” At the end of his sentence, Haydar was transferred from Roumieh prison to General Security on November 10, the brother said. Since then, his family has had no contact with him.

Haydar’s brother said that family members have inquired about his whereabouts, but that General Security officials said that he was not in their custody and that they did not know his whereabouts. Given General Security’s assertion that Haydar is not in their custody and the fact that he has not contacted his family, they fear he may have been deported to Syria and that he is being held there in incommunicado.

Qaraqouz’s wife told Human Rights Watch that Lebanese Military Intelligence arrested him on March 12. A military court convicted him of “transporting weapons,” and he was sent to Roumieh prison. She said she spoke with him before his transfer to General Security when he completed his sentence in October. But she said she has inquired about him at “every General Security branch,” and that General Security has denied that he is in their custody and would provide no information about when or how he was released from their custody. His whereabouts are unknown, and his wife believes he may have been forcibly returned to Syria and detained there since he has not contacted her.

Under article 3 of the Convention against Torture, which Lebanon ratified in 2000, Lebanon cannot send any person – including a convicted criminal – to a country where the person would face a real risk of torture. Syrians at risk of detention upon return in Syria are at serious risk of torture and ill-treatment. Human Rights Watch has documented widespread torture and ill-treatment in Syrian detention facilities since anti-government protests began in March 2011. Lebanese courts have in the past recognized Lebanon’s obligations under article 3 of the Convention against Torture to not deport or send back anyone to their own country if they would be in danger of being tortured. Human Rights Watch sent a letter to Major General Abbas Ibrahim, the General Security director-general, on December 22 asking General Security to reveal the whereabouts of the two men. Human Rights Watch also called General Security on January 9 and 13 to inquire further about their cases, but was told both times that the agency had no comment on the men’s cases.

An enforced disappearance occurs when someone is deprived of their liberty by agents of the state or those acting with its acquiescence, followed by a refusal to acknowledge the deprivation of liberty or by concealment of the fate or whereabouts of the disappeared person.

Lebanese authorities should immediately investigate the whereabouts and fate of Qaraqouz and Haydar, publicly report on their findings, and hold anyone guilty of breaching Lebanon’s international obligations accountable, Human Rights Watch said. The government should stop deporting people to Syria and publicly restate their commitment not to carry out such deportations.

“The Lebanese authorities need to take concrete steps to show that they are committed to upholding their international obligations by ensuring that no one is forcibly disappeared nor returned to persecution or torture,” Houry said.