Hezbollah chief admits his militia is also fighting in Iraq 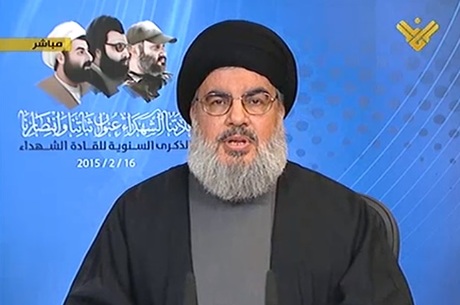 “We may not have spoken about Iraq before, but we have a limited presence because of the sensitive phase that Iraq is going through,” Nasrallah said in reference to ongoing clashes between Iraqi troops, several militias and Kurdish forces against the ISIS.

“I say to those who call on us to withdraw from Syria, let’s go together to Syria,” said Nasrallah.

“I say, come with us to Iraq, and to any place where we can fight this threat that is threatening our (Muslim) nation and our region,” he added.

Nasrallah extended his condolences to the Hariri family, two days after the 10th anniversary of the blast that killed former Prime Minister Rafik Hariri.

Nasrallah also said progress had been made with dialogue with the Future Movement, expressing hope for a “reasonable” conclusion to the talks launched in December.

He also denounced the ISIS killing of the 21 Egyptian Copts in Libya.

5 Hezbollah members are being tried by the Special Tribunal for Lebanon after they were indicted in the killing of Rafik Hariri .

Nasrallah also devoted part of his speech to the death of Jihad Mughniyeh in an airstrike that was attributed to Israel. “Imad Mughniyeh’s son stood on this very stage and swore his allegiance, and declared where he belonged and what he chose,” he said. He said the strike stirred memories of previous Hezbollah “martyrs”, especially Imad Mughniyeh. He vowed that “the enemy” would pay for Imad Mughniyeh’s “blood”.