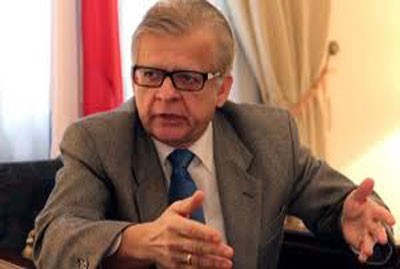 Russian ambassador to Lebanon, Alexander Zasypkin, said Hezbollah’s intervention in the Syrian conflict where it is fighting alongside government forces is legitimate as long as foreign fighters are swelling the ranks of the opposition.

” Hezbollah will remain engaged in the fight to aid the legitimate regime as long as fighters from dozens of countries are streaming into [Syria] to fight against the regime,” Zasypkin said in an interview with An-Nahar daily. “In such emergencies, the need is to focus on combatting terrorism and fundamentalist, not stir strife.”

“We in Hezbollah, in the face of the danger of terrorism, support the call for drawing up a national strategy to fight terrorism. The political parties can agree on this.

The Shiite militant group Hezbollah, which is backed by Russia and Iran, has been playing a significant role in the Syrian war as its fighters battle opposition groups along with pro-government forces.

Asked about prospects of a political solution to the Syrian conflict in the near future, Zasypkin revealed that chances have dimmed due to the situation , both in the region and internationally.

“The U.S. is taking advantage of the Ukrainian crisis to undermine Russia and this has reflected negatively on global issues and disrupted any settlements,” Zasypkin added.

The Russian envoy lauded Lebanese rival factions for their engagement to conduct dialogue which he said “is strongly requested” to deal with “existing challenges and dangers.”

“Foreign countries support this dialogue, especially that it touches on not only Lebanese, but also regional issues, and I mean primarily combating terrorism and extremism,” An-Nahar quoted him as saying.

Hezbollah and the Future Movement launched talks in December aimed at easing sectarian tensions exacerbated by the Syrian conflict, while preparations are underway to have a similar dialogue between Christian rivals, the Lebanese Forces and the Free Patriotic Movement.

“We want the most suitable president for Lebanon,” Zasypkin said, noting that settling the presidential stalemate is linked to all Lebanese factions, not only Christians.

Russia and Iran are the main supporters of the Syrian regime of president Bashar al Assad . Russia blocked many UN resolutions that targeted the Syrian regime. The last resolution that Russia vetoed would have referred the situation in the war-torn nation to the International Criminal Court (ICC).
Over 220, 000 Syrians have been killed since the uprising began nearly 4 years ago