Arab-Israeli lawmakers unite to block Netanyahu from forming next government. 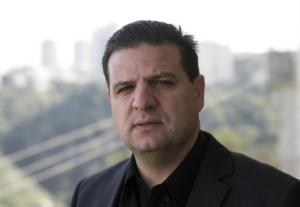 Ayman Odeh, 40, a first-time parliamentary candidate and the leader of the combined Arab list, from the communist Hadash party, poses in his house in the mixed Jewish-Arab city of Haifa, Israel, Monday, Jan. 26, 2015. AP
Share:

Israel’s Arab political parties are banding together under one ticket for the first time ever ahead of national elections in March, hoping to boost turnout and help unseat Prime Minister Benjamin Netanyahu.

The result is an awkward political marriage of communists, Palestinian nationalists, religious Muslims, feminists and even one Jew. But Arab politicians say it will improve chronically low Arab voter turnout and help block Netanyahu from forming the next government.

“We will be a central player in politics like never before,” said Ayman Odeh, a first-time parliamentary candidate and the leader of the combined Arab list.

The four parties agreed to unify last week because of a new law passed last year that raised the percentage of votes that a party must win to land a seat in parliament from 2 to 3.25 percent — a law advanced by Israel’s ultranationalist foreign minister that Arab lawmakers believe was intended to reduce Arab representation in parliament.

Arab politicians say they have come under mounting pressure from their constituents to cooperate in order to tackle the challenges facing the Arab community, including what many see as increased hostility from the Israeli public and Israeli leaders — particularly since the summer war in Gaza.

“People said to us, ‘Your answer should be unity,'” said Masoud Ganaim, the number two on the list and a representative of an Islamic movement.

The unified list is campaigning on promises to prevent Netanyahu from winning again by serving as an opposition bloc that would complicate his coalition-building efforts and help give rise to a center-left government headed by Labor Party leader Isaac Herzog and former peace negotiator Tzipi Livni.
Arab citizens of Israel make up about a fifth of the population of some 8 million, but their participation in Israel’s democracy has long been a complicated matter.

Though they enjoy full citizenship in the Jewish state, Israel’s Arabs say they have suffered from decades of discrimination, with unemployment and poverty often higher than the national average in their communities.

Israel’s Arabs also largely identify with the Palestinian Arabs of the West Bank and Gaza, leading many of Israel’s Jewish citizens to view them with mistrust. Israel’s Arab population mainly consists of Palestinian families who remained in Israel following the 1948 war that attended its creation.

Arab politicians seem to manifest a split identity. They champion Palestinian rights and have long had ties with politicians in the Palestinian territories, but they often speak eloquent Hebrew and are firm believers in participating in Israel’s democratic government. At Odeh’s home in the mixed Jewish-Arab city of Haifa, he displayed both a trophy of appreciation from the Palestinian Fatah faction as well as leading Hebrew novelist Amos Oz’s autobiographical novel. Ganaim, the Islamist representative, has a book penned by Netanyahu on his office bookshelf.

Still, many Israeli Arabs have felt disenfranchised, and previous elections have seen low Arab turnout, with many boycotting the process.
But the union could change that. A recent poll conducted on behalf of the Abraham Fund, which promotes Arab-Jewish equality in Israel, suggests that the unified list would boost Arab turnout to 56 percent — 10 percentage points higher than the last election in 2013. The poll questioned 514 Arab citizens and had a margin of error of 4.5 percent. By comparison, Jewish voter turnout in 2013 was nearly 68 percent.

With that anticipated surge in votes, Arab politicians estimate that their joint list could garner up to 15 seats in the 120-seat Knesset, large enough to help block a hard-line coalition headed by Netanyahu and paving the way for his dovish challengers to form a government. Arab parties traditionally do not join coalitions, saying they do not want to bear responsibility for Israel’s policies in the West Bank and Gaza, but Arab politicians say they would serve as a “security net” by voting with the dovish government even while sitting in the opposition.

The four parties involved in the unified list collectively hold 11 seats in the current parliament. In a poll aired Monday on Channel 2 TV, the union garnered 12 seats, making it parliament’s fourth largest list. The poll had a margin of error of 4.5 percent and surveyed 575 people.

Beyond its potential political might, the union is promising Arab voters a shift in priorities.

Odeh, the fresh-faced 40-year-old head of the joint list, said he wants to strengthen efforts to address the domestic concerns of Arabs in Israel alongside veteran Arab lawmakers’ longtime focus on the rights of Palestinians in the West Bank and Gaza Strip.
Odeh hopes to land a leading position on parliament’s internal affairs committee, giving his list the power to increase budgets to Arab towns that lag behind in development compared to the country’s Jewish towns.

But the united parties, which have yet to choose a name, face hurdles in convincing voters that their varied interests can be fairly represented under one banner.

Osama Masri, 55, an Arab actor, said he would vote for the unified Arab list, but begrudgingly so. He said that as an atheist, he is uncomfortable voting for a party that includes Islamists. Arabs in Israel do not all share the same ideology, he said.

“We’re not a matchbox, with the red part of the matches all lined up in the same direction,” Masri said.