Iran-backed militias are getting U.S. weapons from the Iraqi government 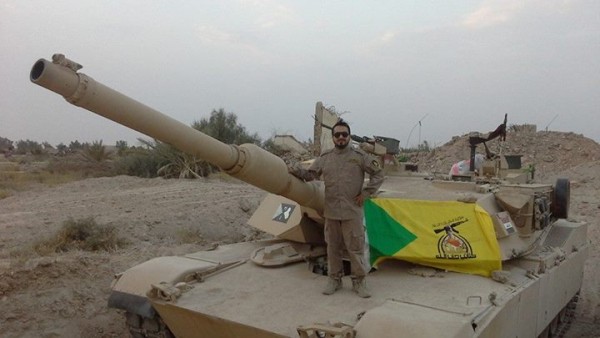 U.S. weapons intended for Iraq’s beleaguered military are winding up in the possession of the country’s Shiite militias, according to U.S. lawmakers and senior officials in the Barack Obama administration. These sources say that the Baghdad government, which was granted $1.2 billion in training and equipment aid in the omnibus spending bill passed last month, is turning hardware over to Shiite militias that are heavily influenced by Iran and have been guilty of gross human-rights violations.

One senior administration official told us that the U.S. government is aware of this, but is caught in a dilemma. The flawed Iraqi security forces are unable to fight Islamic State without the aid of the militias, who are often trained and sometimes commanded by officers from Iran’s Revolutionary Guard Corps. And yet, if the U.S. stopped sending arms to the Iraqi military, things would get even worse, with IS overrunning more of the country and committing human-rights horrors on a broader scale. The risk of not aiding them was greater than the risk of aiding them, the official said, adding that this didn’t mean the administration was unconcerned about the risks involved.

The official added that while the government in Baghdad under new Prime Minister Haidar al-Abadi has been more responsive to U.S. concerns about weapons transfers than the previous government of Nouri al-Maliki, it has not been vigilant enough.

On Facebook, members of Iraqi Shiite militias proudly display American arms, such as the photo shown on the right from October of an M1A1 Abrams tank draped in a Hezbollah flag.

Washington was hopeful that new regime would be more capable and responsive to its concerns, but already there have been some obvious red flags. For example, Iraq’s new interior minister, Mohammed al-Ghabban, was a senior official in Iraq’s Badr militia, an organization U.S. officials have privately suspected of launching attacks on hundreds of Sunni Iraqis over last decade.

Senator John McCain, the new chairman of the Senate Armed Services Committee, traveled to Baghdad last week and met with senior Americans and Iraqis, including Abadi. He told us that officials from both countries informed him that the Iraqi government was handing over American weapons to Shiite militias connected to Iran.

“The Iraqi military is a long way from being prepared to act in an impactful fashion, meanwhile the vacuum is being filled by Shia militias that are Iranian backed. And I was told … that some of those arms came from the United States of America,” McCain said. “The Iranians are now, to a large degree, through the Shia militias, in the absence of a capable Iraqi military, doing most of the fighting against ISIS. That cannot be in the U.S. interest.”

McCain and other U.S. officials said it’s difficult to track the exact weapons the Iraqi government is giving the Shiite militias, and it is also unknown whether the militias are receiving weapons that the U.S. gave Iraq long ago or have been sent to since the U.S. re-engaged in fighting in Iraq over last summer.

Ambassador Jim Jeffrey, who was the U.S. envoy to Baghdad from 2010 to 2012, said that to some degree the Iraqi government has been transferring weapons to Shiite militias for years, an inevitability given the chaotic nature of the Iraq war.

“In any military situation, weapons, small arms, ammunition, trucks, the things that are ubiquitous, did some of that stuff go into the hands of the militias? Sure. It’s a problem that goes back to 2003 and even before,” he said. “We gave the Iraqi military tens of thousands of up-armored Humvees and huge amounts of small arms. There’s a huge glut of that stuff out there. I’m not surprised that some of them were given to Shia militias.”

White House spokesman Alistair Baskey disputed the assertions by other administration officials and McCain: “We have no reason to believe that there is any effort by the Iraqi government to transfer U.S.-supplied weapons to Shia militia. Prime Minister Abadi has repeatedly stressed the importance of ensuring that all militia fighters are demobilized and integrated into existing formal security structures and we continue to work with him on this effort. When it comes to tracking the use of weapons transferred to Iraq, we comply with American law in end-use monitoring.”

Likewise, Commander Elissa Smith, a Pentagon public affairs officer, insisted that the U.S. government complies with American laws regarding end-use monitoring and that all foreign military transfers for Iraq must go through the Iraqi government. “The government of Iraq has committed to provide substantially the same degree of security protection that the U.S. Government would provide. Routine end use monitoring of U.S. provided items is also conducted by the U.S. Government,” she said in a statement.

Yet there are two problems with such statements. First, there are tremendous difficulties with such attempts at end-use monitoring; second, thanks in part the December budget deal, American law on the issue is fairly muddled.

Mike Flynn, the retired general who left his post as director of the Defense Intelligence Agency last year, said Iraq’s military has a very weak tracking system for its weapons. “We can account for every single weapon in the U.S. military,” Flynn said. “In Iraq, despite the great work by our soldiers, there is nothing like that. How can we account for money, weapons and even training in Iraq?”

He added: “The accountability of weapons systems, once turned over to any Iraqi, is at best weak and it may be nonexistent.”

Since the U.S. joined the Iraqi government in its fight against IS over the summer, it and other allied governments have provided a wide array of military assistance, training and arms to the Iraqi security forces, some of which was supposed to be disbursed to other fighting groups such as the Kurdish peshmerga forces. The Kurds allege that Baghdad hasn’t given them most of the weapons Washington wanted them to have.

U.S. weapons aren’t supposed to be transferred to the Shiite militias, which not only have a long track record of human-rights violations, but of killing U.S. forces during America’s occupation of Iraq. More broadly, these militias stand accused of ongoing ethnic cleansing in Sunni areas, further harming the chances for the political reconciliation that will be needed to achieve stability in Iraq going forward.

“It’s clear that in some towns they are driving the Sunnis out that have been there forever and replacing them with Shia. That’s certainly a human rights violation,” said McCain. “One of the key elements to success against ISIS is reconciliation with the Sunni. If the Shia militia are going out and killing Sunni, you are not going to have that reconciliation and Sunni cooperation in fighting against ISIS.”

Lawmakers in both parties are now calling on the Obama administration to provide better accounting for U.S. weapons in Iraq. There are laws on the books prohibiting America from sending arms to foreign militaries guilty of atrocities.

“I am concerned by reports that U.S. weapons have ended up in the hands of Shi’a militia forces — all the more so, given their history of committing atrocities with impunity,” Senator Patrick Leahy, the top Democrat on the Senate state and foreign operations subcommittee told us in a statement. Leahy is the author of the law that requires the U.S. government to cut off training and assistance to military units credibly accused of human-rights violations.

The so-called Leahy law applies only to military forces of a foreign government, not non-state actors. But in Leahy’s view, the prohibition should extend to the Shiite militias in Iraq because they are at least partly funded and under the supervision of the Baghdad government. Last year, the Obama administration determined that the Leahy law legally did not apply to the Iraqi tribal militias or Free Syrian Army. Nonetheless, the administration also determined that, as a matter of policy, it would vet these units for human-rights abusers as if they were foreign militaries.

The situation is all the more murky because the omnibus budget legislation passed last month allows the secretary of defense to waive legal requirements for “end use monitoring” of new weapons and equipment that are sent to Baghdad as part of the new Iraq Train and Equip Program. The budget bill also extends the the secretary’s existing authority to waive the Leahy law itself in “extraordinary circumstances.” (To date, no waivers have been officially invoked.)

Tom Malinowski, the assistant secretary of state whose bureau is in charge of Leahy law compliance, told us late last year that he anticipated the State Department was equipped for the challenge of vetting of the Syrian and Iraqi unites.

“It worked in Colombia and I think it can work in Iraq and Syria,” he said. “It’s designed for situations where we have a strong interest in engaging with a foreign security force, but where human-rights abuses are also an obstacle to achieving our objectives. It gives us better choices than complicity in those abuses or cutting the country off completely. It also provides an incentive for our partners to improve.”

But the scale of the effort in Iraq is daunting. The omnibus package specifies that the U.S. will send the Iraqi military more than 600 mortars of various ranges, 1,200 anti-tank missile launchers, 43,000 M4 carbines and 45,000 body armor kits. On Tuesday, the State Department announced that it was sending Iraq’s military 250 mine-resistant vehicles.

Human rights groups are concerned. In a letter to Secretary of State John Kerry, Amnesty International called on the U.S. to drastically increase its monitoring and assessments of groups it is arming in Iraq and Syria. “No arms transfers should be authorized until such robust risk assessments are completed. It must first be determined that there is no substantial risk of any further arms supplies being used to commit or facilitate serious violations of international human rights or humanitarian law,” it reads.

If the Iraqi government were to monitor the weapons the U.S. provides them, it would be a significant improvement. Stuart Bowen, the special inspector general for Iraq reconstruction, has documented just how much money and weaponry intended for Iraq’s military and police has gone missing.

A big question for the administration is whether Abadi is really doing all he can to rein in the Shiite militias and reach out to the Sunni leaders. During a meeting with Defense Secretary Chuck Hagel last month, Abadi both asked for huge new weapons transfers and also expressed doubt that a long-term reconciliation with the Sunnis is even possible.

Two administration officials told us that there is roiling debate inside the Obama national security team about whether Abadi is willing or able unite his nation’s religious groups. Some inside the administration are advocating for a tougher approach toward Abadi that uses more sticks and fewer carrots. Yet there is concern that pushing away from Abadi will only lead to less influence in Baghdad for Washington, and more for Tehran.

What’s clear, for now, is that U.S. policy will continue to involve giving the Iraqi government the help it requests, even if some of that assistance ends up aiding militias that in the past have battled U.S. soldiers and committed atrocities against Iraq’s Sunni population. While this approach has not produced stability in Iraq or preserved American influence there thus far, it is still deemed better than the alternatives.