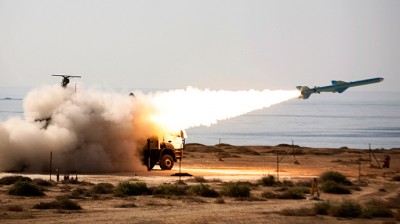 Iranian officials are touting the efficiency of a new national missile defense system that has been dubbed Iran’s “real Iron Dome,” a reference to the joint U.S.-Israeli missile shield that protects the Jewish state from incoming terrorist rockets.

Tehran also has begun to mass-produce its own fighter jets, as well as suicide combat drones and what it dubbed “the world’s first missile evading drone,” according to recent announcements made by the country’s military and political leaders.

Iran first revealed in August that it was gearing up to deploy a mid-range and long-range missile defense system similar to Israel’s Iron Dome. That system is now said to have been activated, according to Iranian officials.

“Today Iran’s Air Defense System has provided our country with an Iron Dome in its real sense and Iran’s airspace is the safest in the region,” Mohammad Hassan Aboutorabifard, the vice-speaker of Iran’s parliament, was quoted as telling reporters in Tehran on Monday.

Aboutorabifard claimed that the defense system boasts the “highest deterrence power in the region,” according to remarks reported by Iran’s state-controlled Fars News Agency.

While Iran has yet to provide footage of the system in action, military leaders claimed last year that it would combine artillery and radar systems capable of destroying incoming rockets in mid-air, just as Israel’s Iron Dome system does.

Iran also continues to build up its military hardware as nuclear negotiations with the West carry on through June.

The domestically produced drone reportedly has self-destructive capabilities, “can “escape thermal and air-to-air missiles,” and is capable of preventing missiles from getting within 250 meters of it, according to Fars, which interviewed the scientist who built the weapon.

Iranian military leaders also announced on Wednesday that the country had begun to mass-produce squadrons of fighter jets, according to Fars.

The unmanned drones are said to act similar to cruise missiles and be capable of flying for eight hours.
Free Beacon