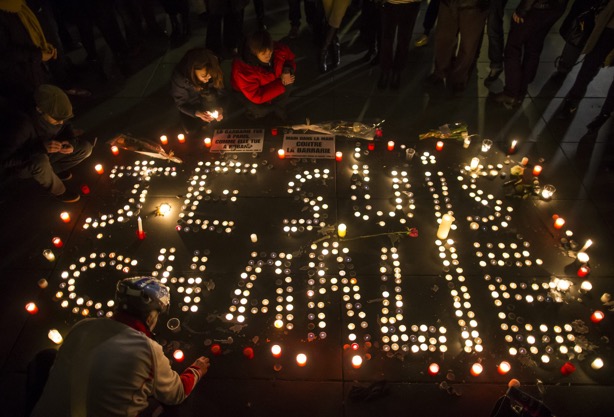 Thousands gather for a candle light vigil on Place de la Republique in central Paris, hours after the attack by two gunmen on the ‘Charly Hebdo’ headquarters in Paris, France, 07 January 2015. According to news reports, 12 people have been killed in a shooting attack at satirical French magazine Charlie Hebdo in Paris. The candles form the message ‘I am Charlie’ EPA/IAN LANGSDON ** Usable by LA, CT and MoD ONLY **
Share:

Police hunted for three heavily armed men with possible links to al-Qaida in the military-style, methodical killing of 12 people Wednesday at the office of a satirical newspaper that caricatured the Prophet Muhammad.

President Francois Hollande, visiting the scene of France’s deadliest such attack in more than half a century, called the assault on the weekly newspaper Charlie Hebdo “an act of exceptional barbarism.”

France raised its terror alert system to the maximum ? Attack Alert ? and bolstered security with more than 800 extra soldiers to guard media offices, places of worship, transport and other sensitive areas. Fears had been running high in France and elsewhere in Europe that jihadis returning from conflicts in Syria and Iraq would stage attacks at home.

Heavily armed police moved into the city of Reims, in France’s Champagne country east of Paris, apparently searching for the suspects. Video from BFM-TV showed police dressed in white apparently taking samples inside an apartment. It was not immediately clear who lived there.

One of the police officials said they were linked to a Yemeni terrorist network, and Cedric Le Bechec, a witness who encountered the escaping gunmen, quoted the attackers as saying: “You can tell the media that it’s al-Qaida in Yemen.”

The officials spoke on condition of anonymity because they were not authorized to publicly discuss the sensitive and ongoing investigation.

Cherif Kouachi was sentenced to 18 months in prison after being convicted of terrorism charges in 2008 for helping funnel fighters to Iraq’s insurgency. He said he was outraged at the torture of Iraqi inmates at the U.S. prison at Abu Ghraib near Baghdad.

The masked, black-clad men with assault rifles stormed the offices near Paris’ Bastille monument in the Wednesday noontime attack on the publication, which had long drawn condemnation and threats ? it was firebombed in 2011 ? for its depictions of Islam, although it also satirized other religions and political figures.

Shouting “Allahu akbar!” as they fired, the men used fluent, unaccented French as they called out the names of specific employees.

Artist Corinne Rey told the French newspaper L’Humanite that she punched in the security code to the Charlie Hebdo offices after she and her young daughter were “brutally threatened” by the gunmen.

Eight journalists, two police officers, a maintenance worker and a visitor were killed, said prosecutor Francois Molins. He said 11 people were wounded ? four of them seriously.

After fleeing, the attackers collided with another vehicle, then carjacked another car before disappearing in broad daylight, Molins said.

Among the dead: the paper’s editor, Stephane Charbonnier.

The staff was in an editorial meeting and the gunmen headed straight for Charbonnier ? widely known by his pen name Charb ? killing him and his police bodyguard first, said Christophe Crepin, a police union spokesman.

Rey said the assault “lasted five minutes. I hid under a desk.”

Two gunmen strolled out to a black car waiting below, one of them calmly shooting a wounded police officer in the head as he writhed on the ground, according to video and a man who watched in fear from his home across the street.

The witness, who refused to allow his name to be used because he feared for his safety, said the attackers were so methodical he first thought they were members of France’s elite anti-terrorism forces. Then they fired on the officer.

“They knew exactly what they had to do and exactly where to shoot. While one kept watch and checked that the traffic was good for them, the other one delivered the final coup de grace,” he said.

“Hey! We avenged the Prophet Muhammad! We killed Charlie Hebdo,” one of the men shouted in French, according to video shot from a nearby building.

The other dead were identified as cartoonists Georges Wolinski and Berbard Verlhac, better known as Tignous, and Jean Cabut, known as “Cabu.” Also killed was Bernard Maris, an economist who was a contributor to the newspaper and was heard regularly on French radio.

Le Bechec, the witness who encountered the gunmen in another part of Paris, described on his Facebook page seeing two men “get out of a bullet-ridden car with a rocket-launcher in hand, eject an old guy from his car and calmly say hi to the public, saying ‘you can tell the media that it’s al-Qaida in Yemen.'”

Charlie Hebdo has been repeatedly threatened for its caricatures of the Prophet Muhammad and other sketches. One cartoon, released in this week’s issue and titled “Still No Attacks in France,” had a caricature of a jihadi fighter saying “Just wait ? we have until the end of January to present our New Year’s wishes.” Charb was the artist.

In a somber address to the nation Wednesday night, Hollande pledged to hunt down the killers, and pleaded with his compatriots to come together in a time of insecurity and suspicion.

France raised its security alert to the highest level and reinforced protective measures at houses of worship, stores, media offices and transportation. Schools closed across Paris, although thousands of people later jammed Republique Square near the site of the shooting to honor the victims, waving pens and papers reading “Je suis Charlie” ? “I am Charlie.” Similar rallies were held in London’s Trafalgar Square as well as Madrid, Barcelona, Berlin and Brussels.

“This is the darkest day of the history of the French press,” said Christophe DeLoire of Reporters Without Borders.

Both al-Qaida and the Islamic State group have repeatedly threatened to attack France, which is conducting airstrikes against extremists in Iraq and fighting Islamic militants in Africa.

During Cherif Kouachi’s 2008 trial, he told the court, “I really believed in the idea” of fighting the U.S.-led coalition in Iraq.

In the winter 2014 edition of the al-Qaida magazine Inspire, a so-called chief describing where to use a new bomb said: “Of course the first priority and the main focus should be on America, then the United Kingdom, then France and so on.”

In 2013, the magazine specifically threatened Charb and included an article titled “France the Imbecile Invader.”

The attack was condemned by world leaders.

President Barack Obama offered U.S. help in pursuing the gunmen, saying they had attacked freedom of expression. He offered prayers and support for France, which he called “America’s oldest ally.”

“We stand squarely for free speech and democracy. These people will never be able to take us off those values,” Cameron said in the House of Commons.

“I think all of Europe is crying today,” said Italian Premier Matteo Renzi. “All the free world is crying. All men and women who believe in freedom and reason are crying.”

Salman Rushdie, who spent years in hiding after his novel, “The Satanic Verses,” drew a death edict from Iran’s religious authorities, said all must stand with Charlie Hebdo “to defend the art of satire, which has always been a force for liberty and against tyranny, dishonesty and stupidity.”

Mohammed Moussaoui, president of the Union of French mosques, condemned the “hateful act,” and urged Muslims and Christians “to intensify their actions to give more strength to this dialogue, to make a united front against extremism.”

The Organization of Islamic Cooperation based in Jiddah, Saudi Arabia, which represents 57 Muslim-majority nations, added its condemnation, saying that violence and radicalism were the biggest enemies of Islam and went against all its fundamental principles and values.

A tweet from an al-Qaida representative who communicated Wednesday with The Associated Press said the group was not claiming responsibility for the attack, but called it “inspiring.”

Supporters of militant Islamic groups praised it. One self-described Tunisian loyalist of al-Qaida and the Islamic State group tweeted that the attack was well-deserved revenge against France.

The hashtag #JeSuisCharlie was trending as people expressed support for the weekly and for journalistic freedom. The weekly’s website collapsed earlier Wednesday but was later restored.

It was the deadliest attack on journalists since 2009, when 32 journalists were killed in an ambush on a political convoy in the southern Philippines.

Philippe Val, one-time Charlie Hebdo chief, raised the possibility of publishing a special edition of the newspaper, saying “a way of speaking has been exterminated.”

“We must respond, because we must testify for them,” he told RTL radio.

HERE ARE SOME FOF THE VICTIMS