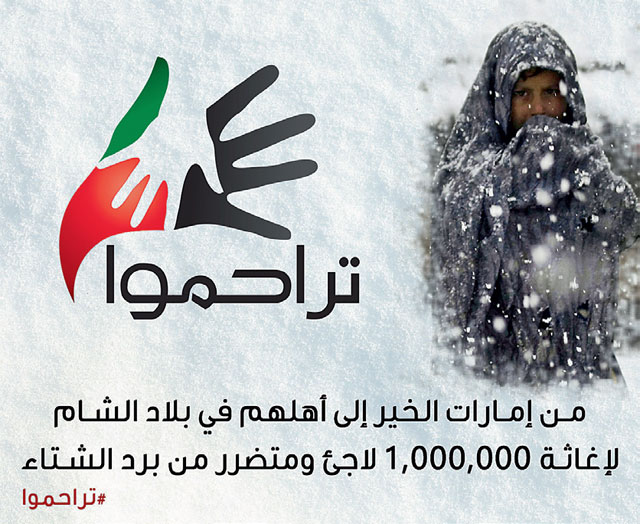 Poster on the “The Compassion Campaign”, by UAE to help the Syrian refugees in the Levant
Share:

UAE President Sheikh Khalifa bin Zayed al-Nahyan ordered an emergency airlift of blankets, winter clothes, medicine, food and heaters to refugee camps in Jordan, Lebanon and Iraq, Gaza and other parts of Palestine,  as a fierce storm batters part of  the middle east  , according to a report published by The National newspaper.

The first flight was due to take off in the early hours of Wednesday morning, according to the report.

Education Minister Elias Bou Saab appealed on  Wednesday to the international community to follow the example of the United Arab Emirates.

“All other states that could help in these conditions should endeavor to assist,” Bou Saab said after meeting with Lebanon’s Grand Mufti Abdul-Latif Derian.

According to Bou Saab, as long as Syrian refugees are present in Lebanon then the country is obliged to fulfill its humanitarian duty toward them.

A snow storm sweeping the Levant region has already taken its toll on Syrian refugees in Lebanon, who are facing freezing temperatures, heavy snow, hail, rain and thunderstorms.

Snow caused several tents to collapse, as refugees tried to keep warm inside their unheated shelters by burning wood and waste paper.

Several refugee families had their tents blown down by strong winds that battered Lebanon overnight and had to seek shelter with other refugees.

In east Lebanon, three Syrians, including an 8-year-old boy, died in the storm in the outskirts of Shebaa in Mount Hermon on the Syrian border.

More than three million Syrians have fled their country during nearly four years of war — with more than 1.2 million seeking refuge in Lebanon alone — creating an enduring humanitarian, economic and political crisis that has put extraordinary pressure on Syria’s neighbors, especially Lebanon, Turkey and Jordan.

Sheikh Mohammed Bin Rashid al Maktoum, ruler of Dubai and UAE VP called upon the global and Arab media to draw the world’s attention to the refugees suffering in the cold in the Levant. “I invite all my brothers and friends in the Arab and global media to focus on this tragedy and by doing so help the aiding of these refugees, especially women and children,” he said.
The UAE also published the following list of bank account numbers for donations to help the Syrian refugees in the Middle East , according to Dubai Daily Khaleej Times.