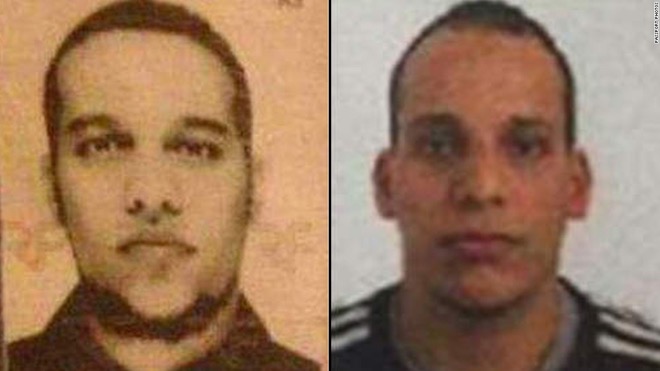 One of the suspects in the Paris attack on Charlie Hebdo magazine has been killed and the two others are in custody, two senior U.S. counterterrorism officials told NBC News on Wednesday.

French authorities would not confirm the U.S. officials’ report.

Authorities earlier had identified the three men as Said Kouachi and Cherif Kouachi, both French and in their early 30s, and Hamyd Mourad, 18. It couldn’t immediately be determined which of the suspects was killed or whether the two others were wounded.

An official who spoke on condition of anonymity because they weren’t authorized to publicly discuss the investigation told The Associated Press that the men were linked to a Yemeni terrorist network. Cherif Kouachi was convicted in 2008 of terrorism charges for helping funnel fighters to Iraq’s insurgency and sentenced to 18 months in prison.

Twelve people were killed in the attack by gunmen, armed with AK-47s, who attacked the offices of Charlie Hebdo, a publication that has enraged Muslims for publishing cartoons depicting the Prophet Muhammad.

A source familiar with the investigation told NBC News on Wednesday night that two officers who had been assigned to protect Charbonnier for the past several years came down from an upper floor and intercepted the gunmen. Both officers were shot, however, and one died at the scene. The other was wounded and is expected to survive.

The men targeted those magazine employees who had created or published cartoons showing Muhammad — asking for their victims by name, the source said. They executed editor and cartoonist Stephane Charbonnier, popularly known as Charb; Bernard Maris, a Bank of France economist who was a columnist for the magazine; and three cartoonists.

Outside the building, as the gunmen tried to flee in their Citroën van, three officers in a police patrol car intercepted them. Two suspects got out of the van, and one fired repeatedly into the windshield of the patrol car.

The source said the patrol car driver slammed the car into reverse, while another officer in the car returned fire at the shooter. The patrol car driver then hit the brakes, allowing an officer in the back seat to jump out and run toward the suspects. But the officer was shot and wounded by the suspects. He was executed with a shot to the head as he lay on the sidewalk.

After killing the officer, the gunmen returned to their car, shouting, “We avenged the Prophet Muhammad,” the source said.

Eleven other people were injured, four of them critically, officials said.

Because the masked, black-clad gunmen attacked with militaristic precision and left the scene with shouts of “Allahu Akbar,” the killers were suspected to be well-trained Islamic extremists.

Little information was immediately available about Mourad and Said Kouachi, but Cherif Kouachi has been suspected of involvement in terrorist groups for at least a decade. In January 2005, he and another French national were arrested in Paris as they were planning to fly to Iraq via Syria. Kouachi was described at the time as one of two deputies to the leader of an operation to send young volunteers to Iraq to fight U.S.-led forces.

Authorities linked the operation to the 19th Arrondissement Network, named for the Paris district where it was based, which is home to many Muslim families with roots in France’s former North African colonies. Kouachi was convicted in 2008 and sentenced to three years in prison, 18 months of which were suspended.

The Associated Press quoted Cherif Kouachi in 2008 as saying he’d been motivated by outrage at images of torture of Iraqi inmates at the U.S. prison at Abu Ghraib. “I really believed in the idea,” it quoted him as saying.

While authorities hunted the suspects Wednesday, shock and mourning spread across Paris and the rest of France, a country with an estimated 5 million Muslims. France has a long, troubled relationship with its Arab immigrants and a more recent history of unrest among young native-born Muslims. There has been growing concern about young men and women returning to France after joining jihadist activity in the Middle East.

Thousands of Parisians took to the streets in spontaneous and defiant demonstrations of unity. They lighted candles and held signs declaring “Je Suis Charlie” (“I am Charlie”) in reference to the magazine. At the Place de la Republique, they crammed themselves up onto the monument in the middle of the square and chanted “Charlie! Liberty!” Candles, posters and signs covered the three statues representing Liberty, Equality and Fraternity — the bedrock of French values.

“They want to scare French citizens and prohibit any criticism of religion, so here we are to remind them that religion can be freely criticized,” said Sasha Reingewirtz, 28, president of the Jewish Students Union.

President Francois Hollande declared Thursday a day of national mourning and called for a minute of silence at noon. Flags will fly at half-staff for three days. The government raised its terrorism threat level to its highest grade and announced that security forces would be deployed at media outlets, major shopping venues, sites of religious worship and transportation networks in the Paris region.

French police have released the names and photographs of two suspects wanted in Wednesday’s terrorist attack on the Charlie Hebdo magazine in Paris.

CNBC issued a correction because it erroneously reported the capture of two suspects and the killing of another in the attack on the French newspaper office . Anchor Brian Williams on Thursday explained that the network relied on two senior U.S. intelligence officials for the information. There had been no confirmation from French officials on the story, which was reported by Pete Williams and delivered on the air by Bill Neely.

“While these sources had been reliable in our previous reporting, the intel they passed along to us last night turned out not to be correct,” Brian Williams said on the air.
“The best information we have tonight is that two are still on the loose,” he said.

An intense manhunt for two brothers wanted in the Charlie Hebdo magazine massacre focused Thursday on northern France’s Picardy region, where sources close to the investigation said a police helicopter might have spotted the suspects.