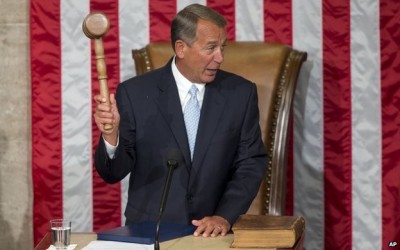 Rep. John Boehner narrowly survived a tense vote to win a third term as House Speaker, winning the support of 216 of his colleagues.

Boehner, R-Ohio, was elected with 216 votes, but 24 Republicans voted for someone else while one voted present.

Boehner needed at least 205 votes from his 409 colleagues in order to win. Many lawmakers missed the vote to attend the funeral of former New York Gov. Mario Cuomo, while others were unable to travel to the Capitol due to the snowy weather in Washington.

Rep. Daniel Webster won the most Republican votes aside from Boehner, pulling in 12 votes in his long shot bid for speaker.

Sens. Jeff Sessions and Rand Paul each received one vote.

The House Speaker does not need to be a Member of Congress, but it always has been a member of the House.

Rep. Nancy Pelosi, D-Calif., received 164 votes from her Democratic colleagues for Speaker and will serve as Minority Leader.

After Rep. John Conyers, the Democrat from Michigan who is the dean of the House, administered the oath of office to Boehner, the 13-term congressman called on his colleagues to “prove the skeptics wrong” and work together on behalf of the American people.

“They say nothing will be accomplished here, that the division is wider, so the gridlock will be greater. That’s all fair enough. Skepticism of the government is healthy, and in our time, quite understandable,” Boehner said. “As Speaker, all I ask – and, frankly, expect – is that we disagree without being disagreeable. In return, I pledge to help each of you carry out your duties. My door, of course, is always open. Just don’t get carried away.”

As he left the chamber, Boehner refused to comment on how he felt about the Republicans who did not support him.

“Stop that,” Boehner said through a smile. “I feel great.”