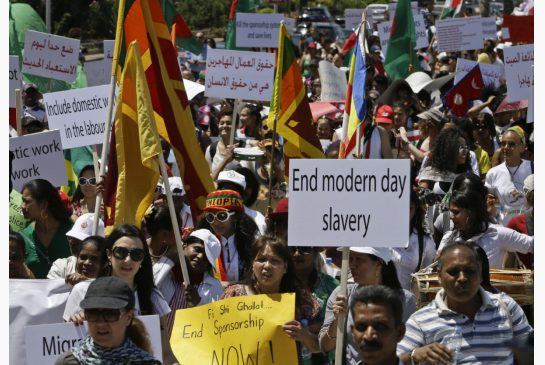 Migrant domestic workers in Lebanon are set to protect their rights under a trade union — the first such syndicate in the Arab world where more than 2.4 million foreign domestic workers labor under often harsh conditions.

The Labor Ministry said Monday they received a proposal from the National Federation of Labor Unions to form the syndicate in Lebanon. Migrant workers in Lebanon — mostly from Ethiopia, Sri Lanka and the Philippines — have fallen victim to unpaid wages, forced labor and even physical and sexual abuse.

At the root of the problem is the “kafala” system, or employee sponsorship arrangement inspired by Gulf Arab countries. Those systems hold the employer legally responsible for their migrant employee. Under this arrangement, domestic workers must rely on employers for their right to live and work in the country.

“We are trying to change the ‘kafala’ system so we can have steady salaries and fixed work hours,” said Sujana Rana, a 36-year-old domestic worker from Nepal.

An amateur video (embedded below) showing a suicidal Ethiopian maid jumping from the fourth-floor balcony of her employer’s apartment last November highlighted the level of desperation of some domestic workers in Lebanon.

“They are trapped by the ‘kafala’ system,” said Nadim Houry of Human Rights Watch. “In this case it was someone who tried to kill herself and in other cases people are falling to their deaths because they are trying to escape from apartments.”

The Labor Ministry will study the proposal determine whether the union’s status is covered by the law, said Marlene Atallah, head of the ministry’s foreign workers division.

“We are trying to help these women but there are obstacles,” she said.

According to the Lebanese labor code, foreign workers cannot create their own union. However, domestic workers may belong to a new housekeepers union as long as it includes some Lebanese members.

“It’s a big step forward,” said Lily Jacqueline, a 49-year-old maid from Madagascar. “Maybe we could have a common contract for all domestic workers and force employers to abide by it.”