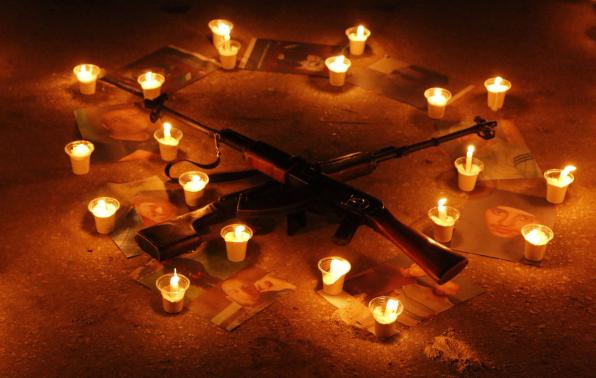 Pictures of war victims are displayed with weapons and candles during a new year event in Salah al-Din neighbourhood in central Aleppo December 31, 2014. REUTERS/Hosam Katan
Share:
The year 2014 was the deadliest year yet in Syria’s four-year conflict, with over 76,000 killed, activists say.

The UK-based Syrian Observatory for Human Rights said 17,790 of the dead were civilians, including 3,501 children.

Much of the violence comes as a result of advances by Islamic State and other militants groups in the two countries.

US-led air strikes against Islamic State (IS) militants, fighting between government troops and rebels in Syria, and sectarian violence in Iraq have also accounted for large numbers of deaths.

The air strikes continued on Thursday, with 17 against IS targets near the Syrian cities of Raqqa, Kobane and Deir al-Zour and 12 near the Iraqi cities of Falluja, Mosul and Sinjar.

Meanwhile Syrian President Bashar al-Assad marked the new year with a visit to front-line troops in the Damascus suburb of Jobar.

Mr Assad’s Twitter and Facebook accounts showed pictures of him talking to two soldiers by a tank and shaking hands with a third.

‘New brutality’
The Syrian figures cannot be independently verified, but the Observatory says its draws on sources all across the country.

Of the 2014 deaths, the Observatory said:

At least 22,627 were government soldiers or members of pro-government militias
Almost 17,000 were militants from groups including IS and al-Nusra Front
More than 15,000 were from moderate rebel groups and Islamist factions
Civilians made up 17,790 of the dead
On the same day, the Iraqi government published its figures on casualties in 2014.

The NGO said there was a “new brutality on the ground and renewed attack from the air”, with IS and the Iraqi army causing thousands of casualties, and US-led air strikes also responsible for civilian deaths.

The year began with the government losing control of Falluja and parts of Ramadi in western Iraq.

In June, a huge offensive by IS left large parts of northern Iraq in militant hands, including the second city Mosul.

Stark numbers
The death toll for 2014 from the Syrian Observatory for Human Rights is just the latest grim statistic from years of war.

An estimated 10.8m people are in need inside Syria
Over 10m displaced by the conflict
3.2m refugees in neighbouring countries
More than 50% of the country live in extreme poverty
Half of the country’s children are not in school
BBC