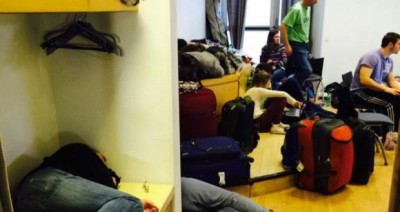 Hundreds of Irish holidaymakers remain stranded in a small airport in the Alps as a result of heavy snow and a technical malfunction on the plane that was due to bring them home at lunchtime yesterday.

Anger is mounting among the group who are travelling with the tour operator Crystal Ski after they were forced to sleep in Chambery Airport because no hotel accommodation nearby could be found for them once it became clear their flight home would be delayed by at least 36 hours.

Liam Collins from Dublin, his wife and two adult children arrived in the airport from a ski resort in the French Alps yesterday at 1.15pm for a flight that had been due to depart two hours earlier.

Because of heavy snow in the region it had taken more than eight hours to get from the resort to the airport. Initially the family were relieved to discover that the flight had been similarly hit by the bad weather and the departure was delayed until just after 3pm.

“We got on the plane and were all set to take off when we were told that the stairs had hit the side of the plane as the doors were closing and it would have to be assessed by an engineer before takeoff,” he said.

The engineer had to come from nearby Lyon airport but because road conditions were so bad delays were anticipated so the passengers disembarked just after 4pm.

“We were then told that they were bringing a new plane from the UK so we just waited. It is a tiny airport and there were hundreds of people milling around. At one point there was barely even room to stand.

“At around 10pm we were told that we were being moved to emergency accommodation in a nearby gymnasium. Some people went there but a lot of us opted to stay in the airport. It was freezing overnight but at least we had our ski-gear and were able to sleep in that,” he said.

There is a single restaurant and one shop in the airport. “The shop has been cleared out by this stage,” Mr Collins said.

Kathy Coyle from Wicklow has also been stranded. “The reps have been doing their best but I think they are overwhelmed,” she said. “They have been forced to do supermarket runs for basics like water. When they arrive back it is like a scene from some famine region when the rice trucks arrive.”

Huge tailbacks on all routes to the French ski slopes have been reported after snow, ice and heavy traffic forced some 15,000 people into emergency overnight accommodation.

Snowfalls of 30 to 60 centimetres (12 to 24 inches) since Saturday afternoon led authorities in France to declare an “orange alert” for snow and ice in four regions. Authorities said the weather conditions are set to improve.