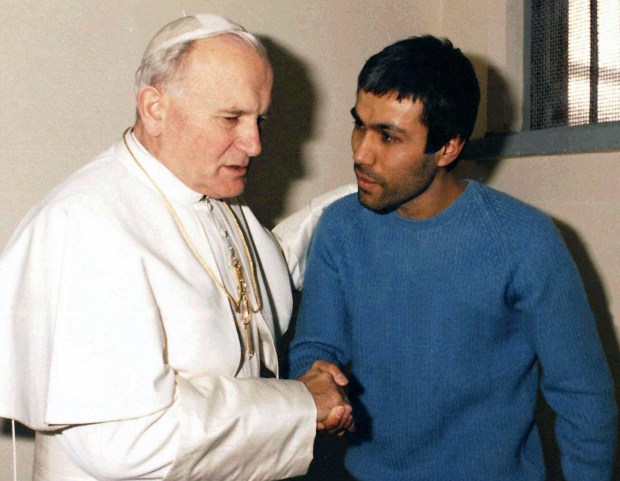 The surprise visit by Mehmet Ali Agca, believed to be his first time in the Vatican since the assassination attempt, lasted a few minutes, a Vatican spokesman, the Rev. Ciro Benedettini, said. As with other flowers left by visitors to the tomb, the blossoms were later removed by basilica workers.

Benedettini said there are no legal matters pending against Agca in the Vatican and he was free to visit. Agca’s trip came on the 31st anniversary of his meeting with the pope.

John Paul, who forgave his attacker, visited Agca in a Rome prison on Dec. 27, 1983, and later intervened to gain Agca’s release in 2000. Agca was extradited to Turkey for the 1979 killing of a Turkish journalist and he completed a 10-year sentence there in 2010.

When Agca was apprehended after shooting the pontiff in St. Peter’s Square during a public audience, the Turk said he acted alone. Later he suggested Bulgaria and the Soviet secret services masterminded the attack on the Polish-born pontiff, whose championing of the Polish Solidarity labor movement alarmed Moscow.

Twice, Italian juries acquitted three Bulgarians and three Turks of alleged roles in the shooting. Agca has often given contradictory accounts and has claimed to be a Messiah.

Italian TV ran a brief video of the tomb visit, apparently filmed by an Italian journalist accompanying Agca in the basilica. The Turk is heard to mumble, “A thousand thanks, saint,” and “Long live Jesus Christ.”