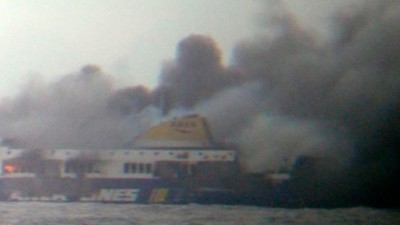 Italian and Greek helicopter crews worked into the night to airlift passengers off a burning ferry adrift in the Adriatic Sea, battling darkness and bad weather that hampered rescue efforts by other ships throughout Sunday.

Helicopters were plucking passengers off the Italian-flagged Norman Atlantic and transferring them to a nearby vessel, after a dramatic day that began when a fire broke out on its lower deck in the early hours.

Authorities said one Greek man had died and there were reports of four injured among 478 passengers and crew and as night fell. The Italian navy said 190 people were clear of the danger zone, with 287 still on board.