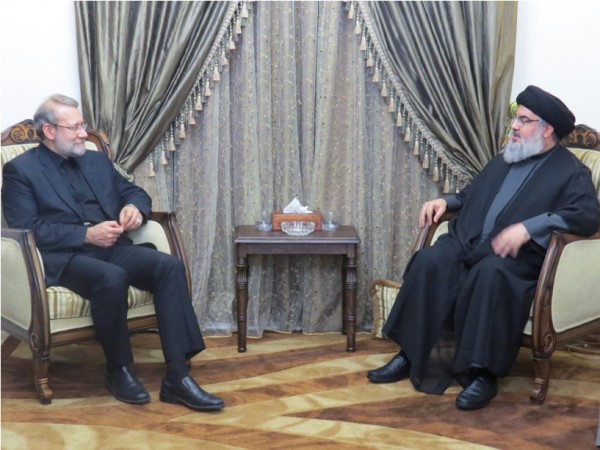 Speaker of the Iranian Shura Council Ali Larijani , concluded his visit to Lebanon  after meeting  with  Hezbollah’s Secretary-General Sayyed Hassan Nasrallah and senior party officials  at an  undisclosed location to discuss regional developments and the political situation in Lebanon, a statement by the party said Tuesday.

The statement  also said the meeting was attended by Iranian Ambassador Mohammad Fathali.

Larijani has renewed his country’s offer to supply the Lebanese Army with weapons and equipment, unconditionally and free of charge, as part of Iran’s support for Lebanon in combating terrorism, Lebanon Defense Ministry said Tuesday in a statement .

The statement said Larijani made the offer during talks he held with Defense Minister Samir Moqbel Monday, before he ended his official visit to Lebanon Tuesday.

“The meeting focused on the situation in Lebanon and the region, during which Larijani renewed his country’s support to the Lebanese Army in its fight against terrorism and readiness to supply the Army with the weapons and equipment it needed, without any return and without conditions,” the ministry’s statement said.

Lebanon rejected  the controversial Iranian military offer  which  was made in September after the Lebanese Army battled jihadists from Al-Qaeda-linked Nusra Front and ISIS in the border town of Arsal .

Sources of Alwatan newspaper estimated last November  that Iran’s proposed grant to the Lebanese army is valued at $7 million. The sources claimed that Iran’s allies in Lebanon have been trying to exaggerate the magnitude of the proposed grant without providing any details about it.

The sources of the daily described Iran’s grant as “shameful ” when compared to the Saudi Arabian grant.

France and Lebanon signed  last month  the Saudi-funded deal worth $3 billion to provide French weapons and military equipment to the Lebanese army to help it fight jihadis encroaching from neighboring Syria.

Larijani  who started his  4-day tour of the region  on Sunday  in Damascus headed to Baghdad Tuesday morning, after meeting with several  Lebanese officials.

More effective than the state

Larijani  hailed what he described as the “positive” role played by the Shiite Hezbollah militant group in the Middle East.

“There are groups that are even more effective than states… like Hezbollah, which plays a positive role in the region,” Larijani said during a lecture delivered at the law faculty of the  Lebanese University in Beirut on Monday.

Larijani praised Hezbollah  for its resistance  role in the Israeli 33-day war in July 2006 .

“This is a great advantage for the Lebanese people to bear the flag of resistance and to have demonstrated a new approach in the Islamic world,” Larijani said.

Iran admitted that its investments in the Syrian regime and Hezbollah was to expand its sphere of influence in the entire Middle East .

A senior military advisor to the Supreme Leader  said last May  that Iran’s sphere of influence now covers Iraq and Syria, stretching to the Mediterranean Sea.

Major General Yahya Rahim-Safavi, the former commander of the Islamic Revolution Guards Corps, made the remarks in a ceremony held to mark the anniversary of the launch of the Beit-ol-Moqaddas operation, the Fars news agency reported on May 4.

The  nearly four -year Syria conflict, which pits President Assad’s forces against rebels trying to end the Assad and al Baath party dictatorship, has resulted in the killing of more than 220,000 people and forced millions from their homes.