Camel Milk in your Chocolate? Only in Dubai 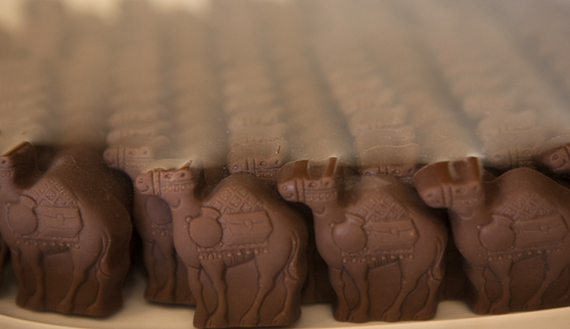 Miniature chocolate camels are displayed at Al Nassma’s Camelicious camel farm store in Dubai. Dubai’s Al Nassma, the world’s first brand of chocolate made with camels’ milk, intends to expand into Arab markets Japan and the US.
Share:

Think of the Arab region, and probably the first things that come to mind are revolution and oil. While for the past three years the Middle East has exported much of the latter, some of its companies have flourished by tapping into local traditions. They’ve rebranded local wares into high-end products and launched them on international markets.

In the malls of Dubai, there is little evidence of the political upheaval rocking the region and even less of the oil fields that have produced the riches of this cosmopolite emirate. What does have a highly visible presence, however, are Cafe Bateel and al-Nassma Chocolate, two companies that have transformed typical Arab staples — dates and camel milk — into a luxury product.

“Both Bateel and al-Nassma have taken ingredients that are specific to the Arab region and added an approachable factor to them. They have used products such as dates and camel milk that may be very foreign to most and made them evolve into a brand everyone wants to associate with,” branding consultant Khatchig Mikaelian told Al-Monitor.

“However, one of our biggest challenges was to overcome people’s prejudice against camel milk and, in particular, as a base for a premium chocolate,” said Kirsten Lange, the director of communications at al-Nassma. Interestingly, customers had a lot fewer reservations than potential partners and distributors, who couldn’t imagine the concept working.

Bateel was born after a trip to Zurich by its chairman, Ziad Al Soudairy. At the time, low-quality dates were mostly available in the dusty souks, or markets, of Dubai, Jeddah or Riyadh.

“Our chairman saw how a Swiss lady going back to Saudi Arabia bought a box of Swiss chocolates because she wanted to take a bit of home with her. He thought at that moment that Arabs need their own ‘souvenir,’” said Tina Memic, Bateel’s deputy general manager for retail.

The company decided to brand the local Arab staple into a sought-after confection, using the traditions of renowned European chocolate houses. Bateel also built its reputation on dates as well as assorted truffles, pralines and ganaches, often delicately stuffed with fruit. These confections were first sold at luxury boutiques before a cafe concept, including a wider range of pastries and food, was later launched.

Al-Nassma launched its premium camel chocolates line in 2008, an endeavor that initially tested its management’s creativity. One major obstacle to al-Nassma’s expansion abroad lay in European export laws that did not recognize camel milk as a chocolate ingredient. When the Emirates Industry for Camel Milk and Products succeeded in getting camel milk listed on the website of the Directorate-General for Health and Consumer Protection of the European Commission in 2013, the product was finally allowed to be imported to Europe.

Bateel and al-Nassma have nonetheless enjoyed an extraordinary expansion in recent years. Bateel currently produces more than 2,000 tons of dates a year, with farms located in Saudi Arabia and three factories situated in Dubai and Saudi Arabia. Al-Nassma, located in the UAE, produces about 100 tons per year, “which underlines the fact that our product is an extraordinary luxury commodity,” Lange added.

Mikeliana acknowledges that the success of these companies can be partly attributed to their adoption of a blue ocean strategy, one that positions them in an uncontested market where they have little or no competition. This approach has guaranteed the two companies unprecedented growth rates in travel retail & duty free: double digits for al-Nassma and more than 30% per year for Bateel.

These high growth rates have eased al-Nassma and Bateel’s expansion into international markets. Bateel currently counts more than 50 cafes and boutiques around the world, of which 22 — mainly in the UAE, Saudi Arabia and the United Kingdom — are directly owned, while other stores in countries such Russia, Turkey and Malaysia, among many others, operate as franchises.

“Al-Nassma is available in the UAE and in most airport luxury travel retail and duty-free outlets, as well as in high-end department stores such as Selfridges in London and various smaller yet high-end sales locations in the United States,” Lange said.

Both producers say that the lack of customer familiarity with dates and camel milk in some countries has constituted a challenge, but Memic pointed out, “However, with customers becoming more and more sophisticated, they enjoy trying and tasting new products, which explains our successful expansion.”

Ingenious branding can also be credited with the success stories of both Bateel and al-Nassma. These two brands are not only known for the quality of their products, but associated with the exotic cultural history of the region. Lange said, “The charm of Oriental culture linked to the tradition of ‘1,001 Nights’ created a wonderful chocolate story to tell. Moreover, being a UAE brand gives us the opportunity to introduce an original and unique piece of culture from this part of the world to a global audience.”

A bit of magic and history is what tourists take home from Bateel and al-Nassma. Arab residents also take pride in buying a local product they can call their own. Mikaelian said, “Dubai and the region needed a unique gift product like Turkish delights are to Turkey. Confectioneries such as Bateel and al-Nassma [offer] delicacies that remain true to the region’s culture and history.”