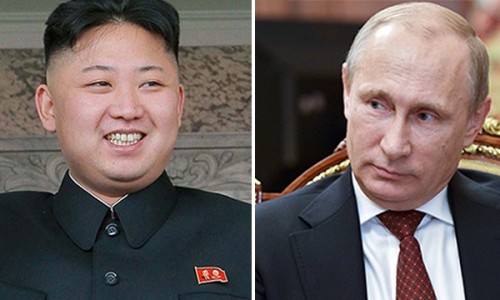 The Russian president, Vladimir Putin, has invited the North Korean leader, Kim Jong-un, to Moscow next year to mark the 70th anniversary of the Soviet defeat of Nazi Germany in the second world war, the Kremlin’s spokesman said on Friday.

It would be Kim’s first foreign visit since taking the helm of the reclusive east Asian state in 2011. His personal envoy travelled to Moscow last month as part of efforts by the two Cold War-era allies to improve relations.

“Yes, such an invitation was sent,” a Kremlin spokesman, Dmitry Peskov, told the state news agency, Tass. Russia marks the former Soviet Union’s 1945 victory every year on 9 May.

Moscow needs North Korean cooperation to boost its natural gas exports to South Korea as Gazprom would like to build a gas pipeline through North Korea to reach its southern neighbour.

Pyongyang is also seeking support from Russia, a permanent veto-wielding member of the UN security council, against international criticism relating to accusations of human rights abuses and its nuclear programme.

A UN committee passed a resolution last month calling for the security council to consider referring North Korea to the international criminal court for alleged crimes against humanity.

The Russian foreign minister, Sergei Lavrov, has also said North Korea is ready to resume the stalled international talks on its nuclear programme.

North Korea, South Korea, Japan, China, Russia and the United States began talks in 2003 to rid the Korean peninsula of nuclear weapons, but they were suspended after Pyongyang tested nuclear devices in 2006 and 2009.

The news comes at a particularly conspicuous moment. On Friday, U.S. federal investigators accused North Korea of being behind the hacking attacking on Sony Pictures Entertainment. An escalation of cyber threats has compelled Sony to cancel the release of “The Interview,” a controversial comedy starring Seth Rogen and James Franco that depicts the two being sent on a mission to assassinate Kim.

The film’s plot riled Pyongyang — and, leaked e-mails revealed, Sony executives — and instigated one of the strangest geopolitical spats of the year, with many in the United States reacting angrily to Sony’s acquiescence in the face of North Korean “terror.”

Meanwhile, Putin has also been in the spotlight. On Thursday, he held a defiant three-hour-long year-end news conference, where he inveighed upon the “external” forces that had conspired to undermine Russia’s economy. Sanctions imposed by the West, a slide in oil prices and a free-falling ruble have all made the end of 2014 a gloomy time for the Russian president.

Putin’s invitation to Kim is reportedly meant as a rebuke of the U.S. and its allies in addition to Russia’s need of North Korean cooperation in its bid to build a pipeline.