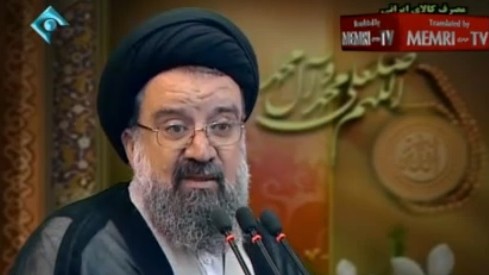 An official site belonging to the Islamic Revolutionary Guard Corps (IRGC) has quoted a senior conservative cleric as saying that Iran has attained the knowledge to build a nuclear bomb but doesn’t want to use it.

The IRGC site of Kurdistan province today quoted Ayatollah Ahmad Khatami, a leading cleric who often leads Friday prayers in Tehran, as telling a group of IRGC commanders in Iran’s Kurdistan province that Iran had the expertise to enrich uranium not just to the 5% and 20% levels required for civilian uses but to higher levels required for a bomb. “[We] can enrich uranium at 5% or 20%, as well as 40% to 50%, and even 90%,” he was quoted as saying. But he said the Islamic republic believed that the building of a bomb is religiously forbidden.

Turning to nuclear talks with world powers, Khatami said Ayatollah Ali Khamenei, Iran’s supreme leader, had blocked any discussion of Iran’s missile programme because the United States did not follow principles. Khatami attacked the government of president Hassan Rouhani for trying to establish formal diplomatic relations with the US and for trying to eliminate the slogan of “Death to America” from use at official rallies.

Khamenei made a religious ruling in 2005 against the manufacture or use of nuclear weapons, although the fatwa’s validity and scope have been questioned by critics of Iran internationally.

Khatami’s speech was widely covered by the Iranian press, but the remarks about Iran’s nuclear bomb-making capabilities were not reported.