Jumblatt distances himself from Hariri , Geagea over ISIS threats

This comes after ISIS held him along with the two other top Lebanese leaders responsible for the possible execution of three of the captive Lebanese servicemen.

“I do not understand the accusation of the Islamic State’s representative regarding France or parties other than France … We have nothing to do with what others are doing or saying,” Jumblatt said.

“I’m not saying this to offend Saad Hariri or Samir Geagea,” the PSP leader went on to say, referring to the two other leaders who were described in the IS’ video as “the allies of France in Lebanon.”

“We have not and will not give up the mediation role, according to the principle of a swap deal, under any circumstances,” Jumblatt said on his official Twitter account, citing the IS’ threat that was announced in a video message.

Jumblatt noted that his close aide, Health Minister Wael Abu Faour, “has exerted efforts and will continue to do so according to the approach of a swap deal, away from the calculations of the others.”

“I hope the Islamic State will appreciate this stance,” Jumblatt added.

A French-speaking militant threatened Friday to execute Lebanese soldiers held hostage by the Islamic State of Iraq and Syria (ISIS) which is now being referred to as Islamic State saying three prominent anti-ISIS Lebanese politicians would be responsible for their deaths.

The threat was made in a video AFP obtained from a Salafist cleric, Wissam al-Masri, who is mediating the release of 25 police and soldiers held by ISIS and the Syrian branch of al-Qaeda, the al-Nusra Front. 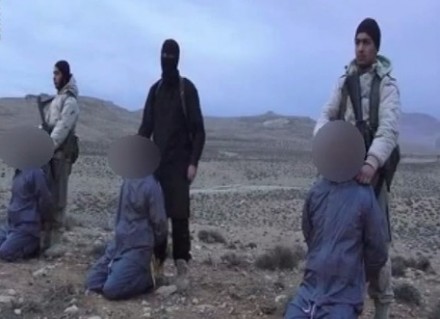 The video, filmed in a field with hills in the background, shows three men in blue uniforms, each kneeling in front of a fighter holding a knife to his throat.

The unidentified speaker, was wearing a hood and his companions’ faces were uncovered. From his speech, it was not possible to determine if he was from Lebanon, where French is widely spoken, or a third country.

Thousands of fighters from France and countries in North Africa where French is spoken have flocked to ISIS ranks.

The speaker attacked the politicians for what he said is their support for Lebanese Shiite movement Hezbollah, whose fighters are aiding Syrian President Bashar Assad in the civil war against largely Sunni Muslim rebels that include ISIS.

“To the allies of France in Lebanon — Hariri, Geagea and Jumblatt — the ISIS is at war with Hezbollah, which is meddling in the affairs of Muslims in Sham [Syria] and has killed our women and our children,” he says.

“You are certainly criminals, but you have added to your crimes today by your collaboration with Hezbollah and your transformation of the Lebanese army into a mere puppet in the hands of Hezbollah, with which it oppresses Sunnis.”

ISIS is a radical Sunni organization that considers Shiite Muslims to be heretics. It has murdered many of them in a campaign of atrocities in areas under its control in Syria and neighboring Iraq.

“You are therefore responsible for the fate of your fellow citizens. Their future, their life and death, depends on your next decision,” he said without making any specific demands of the three men.

Lebanon has tried to insulate itself from the effects of the war in neighboring Syria, but has been wracked by increasing instability and spillover from the nearly four-year conflict.