Castro thanks Obama for “a new chapter”, but says “Cuba stays Communist” 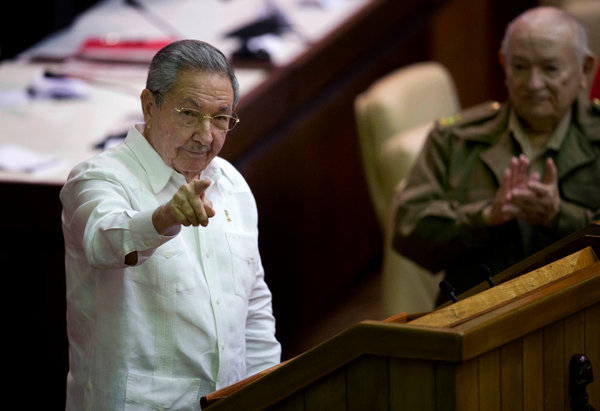 Cuban President Raúl Castro delivers a speech at the Parliament Annual Session, on Dec. 20, 2014, in Havana. He has made clear that he plans to maintain Cuba’s authoritarian system while working on economic reform.Credit Ramon Espinosa/Associated Press
Share:
HAVANA — President Raúl Castro declared victory for the Cuban Revolution on Saturday in a wide-ranging speech, thanking President Obama for “a new chapter,” while also reaffirming that restored relations with the United States did not mean the end of Communist rule in Cuba.

In a televised speech that lasted less than an hour at the end of Cuba’s legislative session, Mr. Castro alternated between conciliatory and combative statements against the United States and the rest of the world.

He emphasized that Cuba would accelerate its economic reform, prioritizing an end to the country’s dual-currency system. But he also said that changes needed to be gradual to create a system of “prosperous and sustainable communism.”

Mr. Castro, wearing a traditional white shirt and only occasionally gesturing for emphasis, also referred repeatedly to President Obama, praising him at one point for initiating the biggest change in America-Cuba policy in fifty years. He also stressed that with the process of open relations just beginning “the only way to advance is with mutual respect.”

He insisted as he and Fidel Castro have insisted for years that the United States not meddle in the sovereign affairs of the Cuban state.

“Every country has the inalienable right to choose its own political systems,” Mr. Castro said. “No one should believe that improving relations with the United States means Cuba renouncing its ideas.

A win for America is seen as a loss for Russia

Just days after President Obama announced a historic thaw in relations between the United States and Cuba, one of Russia’s most hawkish emissaries was set to arrive in Havana on Friday to meet with Cuba’s leadership.

“Now they will suffocate them in their embrace,” Mr. Rogozin said Thursday on Twitter during a tour through Latin America, where he was negotiating economic and weapons contracts in Brazil, Venezuela and other countries.

There is little trust in the benevolence of American foreign policy in Moscow now, largely because of the perceived hand of the State Department in Ukraine’s revolution in February. A well-traveled but still popular joke asks why there has not been a revolution in Washington. The answer: There is no American Embassy there.