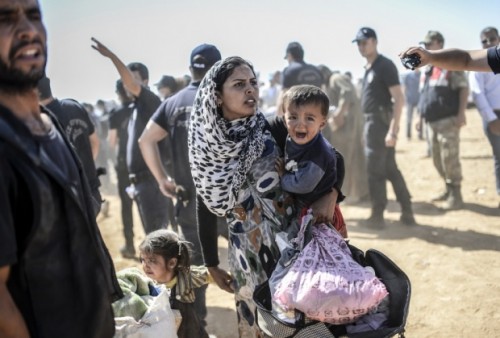 The UN estimates that more than 4 million Syrians have fled abroad since the outbreak of civil war, the largest number from any crisis in almost 25 years. July 8, 2015
Share:
Human rights groups have raised alarm over Canada’s plan to prioritise the allocation of government-sponsored resettlement spaces for Syrian refugees belonging to religious minorities.

The move may exclude the majority of Syrians – Sunni Muslims – from resettling in Canada, and could worsen sectarian tensions in the country, according to Faisal Alazem, director of the Syrian Canadian Council.

“Everyone is suffering from this crisis, and when you start supporting one group over the other, in a sense you encourage civil strife,” Alazem told MEE.

“The bombing is indiscriminate in Syria. When that bomb is falling, it’s not choosing one group over the other, everyone is a target… I do not think that any serious international organisation working in humanitarian aid and human rights could accept such discrimination when it comes to human suffering.”

Responding to questions from opposition MPs in the House of Commons, Costas Menegakis, parliamentary secretary to Canada’s immigration minister, said that Canada would prioritise the resettlement of Syria’s religious minorities, but rejected accusations of discrimination.

“To suggest that we are only going to focus on the one group of people is categorically false,” Menegakis said.

“We have seen countless examples in recent years of people being persecuted for their religious beliefs. We will prioritise persecuted ethnic and religious minorities … those at demonstrated risk, and we will make no apologies for that.”

Gisele Nyembwe, public information officer at the United Nations High Commissioner for Refugees (UNHCR) office in Ottawa, told MEE that the UN refugee body was not commenting on reports about the supposed change to Canadian policy.

Kevin Menard, press secretary for Citizenship and Immigration Canada, also did not clarify the government’s position.

In an e-mail to MEE, however, Menard said that Ottawa had welcomed more than 700 Syrian refugees to Canada on government-assisted and private sponsorship programmes as of 16 December.

Since mid-2013, Canada had “approved more than 1,210 Syrian refugees to come to Canada permanently”, he said. “We continue to work with international partners to ensure Canada remains a world leader in providing protection to the world’s most vulnerable populations.”

Canada has pledged 200 slots for resettlement of Syrian refugees, and another 1,100 for private sponsorship.

Canadian rights groups, meanwhile, have urged Ottawa to bring in 10,000 Syrian refugees, and have disputed the accuracy of the government’s figures.

Alazem, of the Syrian Canadian Council, accused the government of including Syrians that were already in the country when the civil war broke out and stayed, thereby inflating its numbers.

He said that Canada should focus its efforts on helping Syrian-Canadians bring their loved ones to Canada through family reunification, temporary residence permits, or other means, as private sponsorship is a costly and timely process that few Syrian refugees can afford.

“It’s something very doable for a country like Canada, which is the second largest country in the world,” he said.

The United Nations estimates that more than 10 percent of these refugees – some 320,000 people – are extremely vulnerable and in need of resettlement, including torture survivors, single mothers travelling with children, and individuals with serious medical conditions.

On 9 December, foreign states pledged to resettle more than 100,000 Syrian refugees by the end of 2016. This figure includes 62,000 slots already set aside by various governments, but would still only accommodate a third of the most vulnerable refugees.

“Providing refuge for vulnerable people fleeing war is of life-saving importance for the individuals affected, but it’s also an important show of solidarity with countries of the region that are hosting millions of Syrians,” UN High Commissioner for Refugees Antonio Guterres said in a statement.

As of 11 December, UNHCR reported that more than 9,000 Syrians have been submitted for resettlement consideration in the United States.

Germany has pledged to welcome 20,000 Syrian refugees on humanitarian admission, and another 10,000 on individual sponsorship, while Sweden has provided 2,700 resettlement slots. Together, Sweden and Germany have received 96,500 Syrian asylum applications in the last three years; without their contributions, the European Economic Area hosts less than two percent of all registered Syrian refugees.

Janet Dench, executive director of the Canadian Council for Refugees, said Canada has a mixed record on its response to refugee crises historically. Ottawa welcomed very few Jewish refugees during WWII, she said, yet opened its doors to 60,000 refugees from Vietnam, Laos and Cambodia in the late-1970s, and others from the former Yugoslavia, Uganda and Hungary over the last decades.

“There’s much that we’ve got to be proud of, and I think many Canadians think openness to refugees is part of the Canadian tradition. But in the last while, it’s been clear that responding to refugees has been a lower priority,” Dench told MEE.

She explained that Ottawa’s decision to accept primarily Christian populations is not restricted to Syria, but also evidenced in other countries in the region, including Iraq. “The sticking point is the desire that the Canadian government apparently has to say that we won’t take any Sunni Muslims,” she said.

Discrimination on the basis of religion, Dench added, would never be supported by the UN, which coordinates the refugee resettlement process with foreign states.

“It would be a very shameful moment if Canada was to find that its resettlement program had to work outside the UN because we were violating a fundamental principle of the UN, the principle of non-discrimination.”