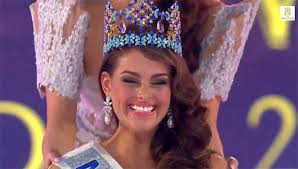 The 22-year-old beauty won hearts with her background as a medical student in her native country .

“South Africa this is for you,” Strauss said afterwards.

“I think I will brace myself for what’s about to happen. It’s a huge responsibility.”

“I hope Miss South Africa enjoys her year as much as I did,” said Young, meanwhile. Young became the first bet from the Philippines to win the Miss World tiara last year.

Edina Kulcsar of Hungary was runner-up, while the United States’ Elizabeth Safrit was third.

But the night was as much about Young as the new winner, with the reigning beauty queen serving as host of the event. “It’s not just a legacy for myself, but a legacy for Filipinos,” she said in a video package prior to the announcement of the winner.

She also had a piece of advice for the new Miss World: “Be ready for challenges, be ready for anything that comes your way.”

Philippines bet Valerie Weigmann failed to make it to the semifinals of the competition, ending her dream of winning back-to-back crowns for the country.

The former Eat Bulaga co-host had made it to the top 25 of the competition, but was left out of the top 10.

Weigmann had a chance to become the 11th semifinalist by winning the People’s Choice Award, which is based on fan voting. But it was Miss Thailand who ended up winning the award and catching the last bus to the semifinals.