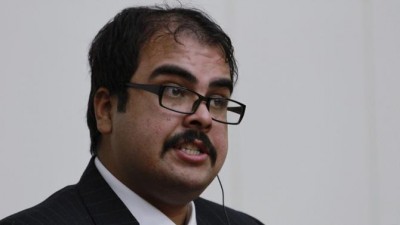 A U.S. citizen who illegally entered North Korea delivered a lengthy denunciation of U.S. domestic and foreign policy on Sunday and said he was seeking political asylum in Venezuela, the North’s official media said.

The man identified himself as Arturo Pierre Martinez, 29, from El Paso, Texas, in video footage of a press conference released by the North’s KCNA news agency. He said he had taken “a risky journey to reach the (North) so that I could pass along some very valuable and disturbing information”.

A KCNA article released with the footage said Martinez spoke of human rights violations committed by the U.S. government and its attempt at forcing imperialist influence and domination on other countries.

Reclusive and impoverished North Korea is under international sanctions for its nuclear and missile programs. It regularly threatens war on democratic South Korea and the South’s major ally, the United States.

U.S. State Department was aware of reports about a U.S. citizen crossing into North Korea, spokeswoman Marie Harf said in a statement on Sunday.

“We stand ready to provide all possible consular assistance. The welfare and safety of U.S. citizens abroad is one of our top priorities,” she said, adding the State Department strongly recommended against all travel by U.S. citizens to North Korea.

Martinez’s mother told CNN her son was mentally unstable and has bipolar disorder, and had previously tried to enter North Korea from the South by swimming across a river. He was captured and sent back to the United States where he was committed to a psychiatric hospital in California, she said according to CNN.

“He is very smart and he got the court to let him out and instead of coming home to us, he bought a ticket and left for China,” the television news channel quoted Patricia Eugenia Martinez as saying.

Martinez said in the KCNA article that he had been staying in a nice hotel and was being treated well by theNorth Korean government and that he would seek political asylum in Venezuela.

Martinez said he chose to come to North Korea to talk about U.S. policy because it has successfully defied U.S. influence by maintaining a “very powerful military”.

Miller and Bae had both been serving hard labor sentences in North Korea for breaking local laws, but were released in November during Clapper’s visit. A third detained U.S. citizen, Jeffrey Fowle, was released in October.

“(I am) extremely grateful for having been pardoned from the punishments given to violators of these laws, and for the most generous reception I have received,” CNN reported Martinez as saying in a statement at the news conference.

Venezuelan President Nicolas Maduro has criticized the U.S. Senate for passing a bill that would impose sanctions on government officials found to have violated protesters’ rights during demonstrations earlier this year.

Critics of Maduro say he blasts the United States to distract Venezuelans from the cash-strapped country’s ballooning economic crisis.