Black flags and Christmas lights: a letter from Beirut 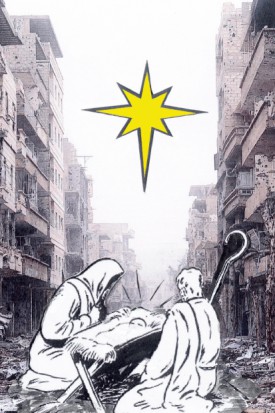 Blue and white Christmas lights twinkle over the shops near my apartment in Beirut’s Christian quarter; pricy boutiques display elaborate nativity scenes. But people are having trouble getting into the festive mood. ‘Do you think the war will come here?’ asks my landlady nervously, not for the first time. There is no rush to battle, no electric charge in the air, just a rather depressed feeling among Lebanese that their country can no longer escape the violence over the border in Syria. The black flag of the so-called Islamic State has appeared after Friday prayers in some mosques in the north. The assumption is that Lebanon will be the next place the jihadis target. Still, there are reasons to hope.

Sectarian bloodletting might have begun after Isis and another al-Qa’aeda offshoot, the Nusra Front, kidnapped 30 Lebanese soldiers. Three have been beheaded. Most of the group are Shia and if they are all killed, many fear revenge attacks on Sunnis. I look out of our office window to see dense black smoke billowing up from burning tyres: the soldiers’ families protesting. They have set up camp right outside the Lebanese cabinet offices, tents adorned with pictures of the missing men. The families want the government to agree a prisoner swap with the jihadis. Isis cleverly let them visit the captives. One protestor, Nizam Meghet, told me he barely recognised his brother, a corporal; he’d lost so much weight. ‘We’re here from all sects and confessions, Sunnis, Shia, Druze and Christians,’ said Nizam, a Sunni. An elderly Shia man, with a son held hostage, nodded. So far, the crisis has brought the country together.

The pessimists believe that Isis are stronger after American bombing. That is because the US also bombed Nusra, in most parts of Syria a bitter enemy of Isis. The two groups had been enthusiastically killing one another but then some sources spoke of a new unity forged by American cruise missiles. That would be bad for Lebanon, where Nusra has a following among Sunni refugees, but I would be surprised if it really happened. Al-Qa’eda’s history is of factions splitting and splitting again, declaring rivals apostates and severing their heads. Despite talk of a grand alliance, the two groups continue to trade insults on Twitter. ‘The blood of our brothers shall not be wasted. We will retaliate many times over,’ tweeted one Isis member to Nusra. ‘Blood for blood; destruction for destruction.’

The British government is spending £20 million to stop the jihadis invading Lebanon. The money is to build new border posts and train the soldiers manning them. The effort is led by a booming former Guards officer, Giles Taylor, who is much loved by the Lebanese troops he instructs. The jihadis — Nusra and Isis — briefly took over the border town of Arsal and were heading for the Christian village of Ras Baalbek. Thirty pickup trucks with heavy machine guns came down from the Syrian mountains. Hundreds of fighters emerged from refugee camps inside the Lebanese border. The attackers were turned back ‘shocked and disheartened’ at one of the heavily fortified new posts paid for by the British taxpayer, said Lt Col Taylor, happily.

Isis has had one unambiguous success: attracting young Muslims from western countries. Suicide attacks are usually carried out by the foreigners, the Islamic State’s ‘useful idiots’. One was Kabir Ahmed from Derby, who last month became the first British Isis suicide bomber in Iraq. I have written here before about his death because I find it so disturbing that he abandoned a wife and three children to seek martyrdom. ‘We don’t fear death,’ he told me. ‘This is the way of our prophets and the way of our messengers.’ He is part of an al-Qa’eda tradition that saw Saudi mujahedeen in 1980s Afghanistan pitch white tents so Soviet bombers could spot them (to the puzzlement and disgust of the Afghans). The jihadi cult of death is nothing new. It is still shocking to talk to someone who is not just willing but eager to die.

The jihadi threat makes Sister Georgette, of the Good Shepherd Sisters of Lebanon, grateful for the nearby presence of the Shiite militia, Hezbollah. ‘They maintain discipline,’ she says. ‘They keep the terrorists out.’ I meet her at the Catholic charity she helps run, the St Antoine dispensary, handing out bags of nappies to women in hijabs. ‘We receive everybody,’ she says. Such small charities are assuming a vital role with 1.5 million refugees in the country, a third of Lebanon’s population. The UN is overwhelmed and has had to cut food rations. On the day I visit, the Beirut Daily Star reports two babies dying of cold in a refugee camp. The whole country is under strain. ‘Sometimes Lebanese come to shout at me,’ says Sister Georgette. ‘They say where is our help?’

She introduces me to two Christian women who have fled to Lebanon from Iraq with their families. Both weep when I ask them how they will spend Christmas. ‘We used to own a house with an orchard and a car,’ says Iman Hermes. ‘Now we are beggars.’ Her friend Ebtasam Kordees says her husband was a respected man in their village near Mosul, a geography teacher. Now he cannot find work of any kind. ‘At least we were able to flee without our girls being violated, unlike the Yazidis,’ she says. Both are terrified of the Islamic State and say they will not return to Iraq nor stay in Lebanon. They want the UN to speed up their paperwork to emigrate. ‘We don’t care where. We just want to leave.’ Sister Georgette informs me sadly that every Christian refugee family she helps says the same. Lebanon might avoid a civil war, she goes on, but there will be fewer people celebrating Christmas next year, and the year after. ‘Christians are leaving the Middle East,’ she says. ‘It’s a pity. But it’s true.’

This article first appeared in the print edition of The Spectator magazine, dated 13 December 2014