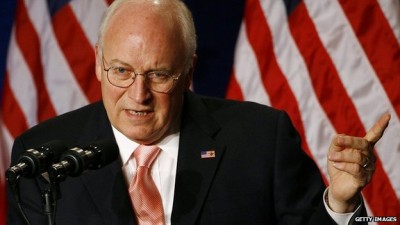 Speaking to Fox News, Dick Cheney said Mr Bush “knew everything he needed to know” about the programme, and the report was “full of crap”.

The CIA has defended its use of methods such as waterboarding on terror suspects after the 9/11 attacks.

The Senate report said the agency misled politicians about the programme.

But the former Republican vice-president dismissed this, saying: “The notion that the committee is trying to peddle that somehow the agency was operating on a rogue basis and that we weren’t being told – that the president wasn’t being told – is a flat-out lie.”

In the interview on Thursday, Mr Cheney said the report was “deeply flawed” and a “terrible piece of work”, although he admitted he had not read the whole document.

President Bush “knew everything he needed to know, and wanted to know” about CIA interrogation, he said. “He knew the techniques… there was no effort on my part to keep it from him.

“He was fully informed.”

Mr Bush led the charge against the report ahead of its release on Tuesday, defending the CIA on US TV.

“We’re fortunate to have men and women who work hard at the CIA serving on our behalf,” he told CNN on Sunday.

A summary of the larger classified report says that the CIA carried out “brutal” and “ineffective” interrogations of al-Qaeda suspects in the years after the 9/11 attacks on the US and misled other officials about what it was doing.

But Mr Cheney said the interrogation programme saved lives, and that the agency deserved “credit not condemnation”.

“It did in fact produce actionable intelligence that was vital in the success of keeping the country safe from further attacks,” he said.

The UN and human rights groups have called for the prosecution of US officials involved in the 2001-2007 programme.

“As a matter of international law, the US is legally obliged to bring those responsible to justice,” Ben Emmerson, UN Special Rapporteur on Human Rights and Counter-Terrorism, said in a statement made from Geneva.

He said there had been a “clear policy orchestrated at a high level”.

Correspondents say that the chances of prosecuting members of the Bush administration are unlikely, not least because the US justice department has said that it has already pursued two investigations into mistreatment of detainees since 2000 and concluded that the evidence was not sufficient to obtain a conviction.

Methods of the past?
None of the countries where the prisons were located has been identified in the report, but several countries suspected to have hosted so-called “black sites” reacted strongly to the publication.

Afghan President Ashraf Ghani is among the world leaders to have condemned how the agency imprisoned and questioned al-Qaeda suspects.

He said the programme “violated all accepted norms of human rights in the world”.

US President Barack Obama said on Tuesday that he hoped that the publication of the report would “help us leave these techniques where they belong – in the past”.

He banned harsh interrogation techniques after taking office in 2009, and has acknowledged that some methods amounted to torture.

Some Republicans on the Senate Intelligence Committee released a minority report, accusing the Senate of having a “flawed analytical methodology”, “inadequate objectivity” and “political considerations”.

However, influential Republican Senator John McCain argued that torture “rarely yields credible information” and that even in the hunt for Osama Bin Laden the most important lead came from “conventional interrogation methods”.