Badaro, another Beirut neighborhood that comes back to life

By: Vivian Haddad
Beirut, Lebanon – For many years Beirut’s Badaro Street was known as the beating heart of the city. Then the Lebanese civil war broke out in 1975. The vibrant neighbourhood was caught up in the thick of the fighting, sitting only a few yards away from the green line. After a long period of silence, the street is coming back to life, fast becoming a place where businessmen, politicians, media reps and artists assemble in its many new coffeehouses and restaurants.

In a ceremony attended by state officials under the auspices of Lebanese Minister of Tourism Michel Pharaon the street was re-inaugurated last weekend at a cost of 15 million US dollars provided by the Council of Development and Reconstruction and the Beirut Municipality. The official opening saw a Christmas market, music and theater performances take over the thoroughfare.

As older residents browsed the tents at the “Noel A Badaro” festival they were reminded of the good old days and the time they spent in the street’s famed establishments, including the Badaro Inn and L’Orientale restaurant.

Nabil Karam, a local architect, said he still remembers what the street was like in the early 1970s when he used to come to meet with friends at the Badaro Inn coffeehouse, spending many an evening absorbed in conversation until the early hours of the morning.

One lady who was enjoying the festivities with her family said: “I wish my daughter had seen this street in the 1970s. The street had a truly unique atmosphere that distinguished it from the other old streets of Beirut in terms of its architecture, coffeehouses and restaurants. Today, I’m happy to have seen and enjoyed being in Badaro before the war and today.”

Over the past three years the street has been through several renovation phases to restore it to its original condition. First the basic infrastructure had to been fixed including electricity and water supplies and drainage. A headquarters for the Beirut municipality guards was constructed in the middle of the main street. Then it started to attract investors.

Members of Lebanon’s hospitality scene flocked to the area. Twenty cafes have recently opened including Kudeta Cafe, Don Baker, Mum and I, and Lina’s. The redevelopment of Badaro also saw the construction of the luxury Smallville Hotel.

Georges Brax, Chairman of the board of Badaro Traders Association, who took part in the official reopening of the street, said that the officials in charge of rehabilitating the area were keen to see the street rival other fashionable Beirut neighborhoods. Brax said the street serves as Beirut’s administrative gate from the southeast and that it is seen as a top destination for potential investment opportunities. 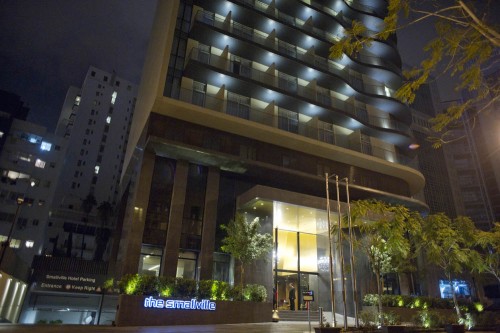 The area is also set to go green with plans to build cycle lanes and a park. Brax told Asharq Al-Awsat that the Badaro association hopes to avoid the mistakes of Beirut’s past redevelopment projects such as in Gemmayzeh where residents have had to put up with congested traffic and blaring construction works.