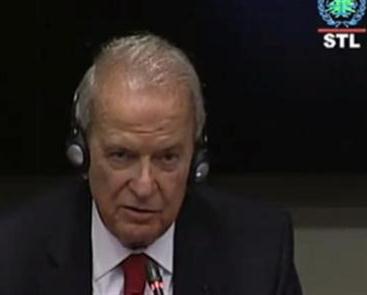 The Special Tribunal for Lebanon continued Thursday with its trial in absentia of the five Hezbollah members who were indicted the assassination of former Prime Minister Rafik Hariri who was killed in February 2005.

Former Communications minister MP Marwan Hamadeh, who was the first politician to appear as a witness in the case provided answers during the cross-examination of defense counsel Vincent Courcelle-Labrousse.

He admitted that when as telecom minister he “took the lid off the provision of data according to the agreement signed with the Lebanese government” he was no longer following the issue.

The U.N. commission investigating Hariri’s murder in a suicide car bombing on the Beirut seafront had examined telecom data, which later the STL Prosecution based its circumstantial evidence on.

“I think we should have brought here all the files of the ministry of telecommunications so that we could have a complete and not a selected view,” said Hamadeh.

“The lawyer is trying to imply that I was a one man show in this operation,” he added.

But defense counsel Courcelle-Labrousse replied: “Had I had the documents I would have displayed them. The prosecution is refusing to disclose them to me.”

At first, “the system was unblocked for the provision of the database,” said Hamadeh.

“But after the government of Mr. Fouad Siniora resigned (in June 2008), new ministers of telecommunications started putting conditions and barriers to the provision of this data to the commission and then the prosecutor,” Hamadeh added

He said the ministers were members of the Free Patriotic Movement allied with Hezbollah.

Hamadeh confirmed to the STL that he received from MTC ( cellular phone company) a copy of a warrant by the U.N. commission investigating Hariri’s murder requesting cooperation and assistance and providing it with numbers.

Hamadeh told the court that MTC needed the approval of the ministry before giving the commission any numbers. But MTC first referred the warrant to the telecom operator. The issue was resolved later and I gave the operator the right to provide the numbers.

Hamadeh told the court : ” There are 2 laws in Lebanon against wiretapping Law 431 and another one.

Hamadeh stressed that he “didn’t have the authority as telecom minister to intercept telephone communications.”

Hamadeh told the court that Chief UN investigator Daniel Bellemare always insisted on pursing his inquiry. Sometimes he was blocked by telecom ministers belonging to a group allied to Hezbollah.

Hamadeh on describing the accused as criminals told the court: ” This is a political debate and Hezbollah has repeatedly accused us as being agents of imperialism and that we assassinated Hariri.”

He told the court: “My statement about the criminals was normal and spontaneous, especially after the indictment brought back detailed memories of the last days of Hariri’s life.”

Hamadeh told the court: “I do not believe that I violated the presumption of innocence when I accuse Hezbollah and no one can prevent me from doing so.”

Hamadeh told the court before concluding his testimony on Thursday : ” The government which we labeled as “Hezbollah’s government” seized control of the country in 2011 amid the consent of the Syrian regime, and when Intelligence chief Wissam al-Hassan was assassinated, the telecom issue stirred a major debate inside the cabinet.”

On Wednesday, another defense lawyer claimed there had been frequent meetings between Hariri and Hezbollah chief Sayyed Hassan Nasrallah, who had formed a parliamentary committee to set the stage for a Sunni-Shiite alliance that was set to be announced in 2005.

Hamadeh revealed to the court that Hariri had met with Nasrallah about a month before the Valentine’s Day assassination.

The two officials had regular contacts ahead of the 2005 parliamentary elections, the lawmaker said.

Hamadeh also revealed that Nasrallah told him in a secret meeting in either April or May 2005 that he “did not know” if Syria was behind his Oct. 1 assassination attempt.