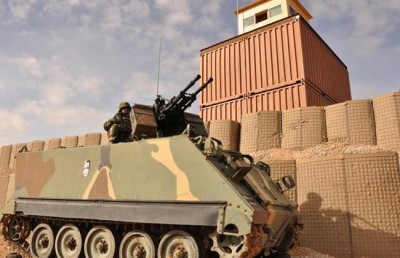 The Lebanese army’s Brig Gen Ali Mourad got a WhatsApp message from the Islamic State (IS). It was short and to the point. “We are the heroes of Qalamoun,” it said, referring to the mountains on Syria’s border with Lebanon, “and we’re going to kill you.”

Gen Mourad has a robust attitude to this threat.

“We want them to come, these terrorists,” he told me, at one of the heavily fortified positions paid for by the British government.

“We are waiting for them [here].

“When we see them, we shoot them, all the time.”

We were at Tango Ten, the 10th of 12 new posts built so far with UK money and expertise along Lebanon’s border with Syria. It looked down over a dusty plain to the snow-covered mountain that is controlled by various jihadist groups and used by them as a base to launch attacks.

The Lebanese soldiers at Tango Ten say they come under fire almost every night. They used to crouch behind a few tyres filled with concrete, “eyes like saucers, gripping the 50-cal [heavy machine gun,” said one of the former British army officers advising the Lebanese. Now they have proper defences, and morale is good.

Tango Ten had shades of Northern Ireland in the guard tower and Afghanistan in the Hesco barriers – which are earth-filled defensive walls. There was even a fleet of Land Rovers parked inside.

The UK has spent some £20m to stop the jihadists from invading Lebanon.

“Lebanon is… a fragile country,” said the British ambassador to Lebanon, Tom Fletcher.

“We’re only 20 minutes away from Europe.

“If this domino falls, then other dominos will follow, and that has implications for our own national interest,” he said.

“IS would love to score a symbolic victory in Lebanon. It would signal a level of ambition, a level of effect, that would be both magnetic to people who would want to fight with them but would also frighten their opponents.”

The jihadists briefly took over the border town of Arsal in August. Pickup trucks with heavy machine guns came down from the mountains of Syria, and fighters emerged from the refugee camps around the town.

Some started pushing out, heading for the Christian villages of Ras Baalbek and Qa, but they were stopped at Tango Ten.

The attackers might have been trying to flank the Lebanese forces surrounding Arsal, rather than making a serious attempt to take the Christian villages. But regardless of this, people there are terrified, and grateful the Lebanese army was able to halt the attack.

“The assistance provided by the UK was of great importance,” said another senior Lebanese army officer, Brig Gen Maroun Hitti.

The country was only 50km (30 miles) wide, lacking “strategic depth” and therefore vulnerable to forces that could move quickly, he said.

Lebanon’s border with Syria has scarcely been defined, let alone controlled, for most of the country’s history.

The new posts meant the state was now present along 50% of the border, the general said, and it is hoped all this will help stop the violence of Syria’s civil war from spreading.

“The distance from Beirut to Raqqa [the Islamic State’s “capital” in Syria] is not much. When the enemy is close, you feel more the danger,” said Gen Hitti.

Lebanese commanders say for the attack on Arsal, the jihadists were able to muster some 3,000 fighters, most coming out of the refugee camps inside Lebanon rather than from Syria. British sources put the figure at 500 emerging from the camps plus 30 pickup trucks with heavy machine guns from Syria.

Everyone agrees that most of the force is not from the Islamic State but from the Nusra Front, another offshoot of al-Qaeda but one seen as less militant.

Real numbers are impossible to determine independently, but the BBC’s sources say there may be only 300 Nusra fighters and as few as 30 members of IS on the border.

The terror tactics familiar from Iraq and Syria are already being used in Lebanon.

In the fighting for Arsal, Nusra and IS captured some 30 Lebanese soldiers, and some have already been beheaded.

‘Volcano of a civil war’

A majority of the captured soldiers are Shia Muslims, and if they are all killed, there are fears of revenge attacks on Sunnis, a spiral of sectarian bloodletting, perhaps a new civil war.

But against all expectations, the crisis has largely brought the country together.

There was “0%” chance of a new internal conflict in Lebanon, said Gen Hitti.

“Deep inside, every single Lebanese knows what would be the cost of giving their ears to external interference, to external appeals, that would throw them again into the volcano of a civil war,” he said.

Gen Hitti is a Christian, and his colleague Gen Mourad a Sunni Muslim.

With the exception of one or two defections of soldiers to IS, the Lebanese army has not split along sectarian lines. It remains internally united and, according to opinion polls, trusted by most Lebanese, whatever their religion or sect.

In Iraq, IS was able to capture Mosul by inspiring terror in their enemies and exploiting the corruption and sectarian divisions of the Iraqi army. The same could not happen here, said Gen Mourad.

“The Lebanese army is not the Iraqi army,” he said.