In Turkey Pope Calls for Muslim Opposition to Islamic State 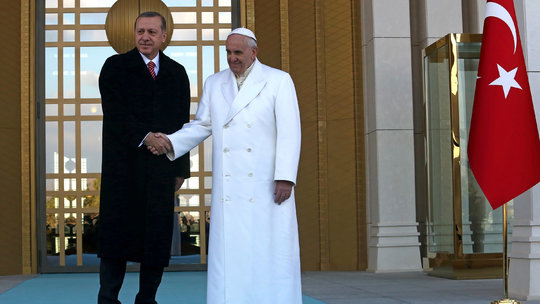 In his first visit as pope to a predominantly Muslim country, Pope Francis said in Turkey on Friday that inter-religious dialogue, more than just military action, was required to combat Islamic State militants who are attacking Christians and other religious minorities along the country’s southern border.

“To this end, it is essential that all citizens — Muslim, Jewish and Christian — both in the provision and practice of the law, enjoy the same rights and respect the same duties,” the pope said in a televised speech from President Recep Tayyip Erdogan’s presidential palace in Ankara. “They will then find it easier to see each other as brothers and sisters who are traveling the same path, seeking always to reject misunderstandings while promoting cooperation and concord.”

The papacy has had a tarnished image among Muslims in Turkey since 2006, when Francis’ predecessor, Benedict XVI, quoted a Byzantine emperor who called Islam “evil and inhuman.”

Francis called for fighting against fanaticism and fundamentalism, especially in the Middle East, and the 77-year-old pope said United States-led military assaults against the Islamic State, also known as ISIS or ISIL, were not enough to counter “irrational fears which foster misunderstanding and discrimination.”

“In Syria and Iraq, particularly, terrorist violence shows no signs abating,” the pope said, adding: “In reaffirming that it is licit, while always respecting the international law, to stop an unjust aggressor, I wish to reiterate, moreover, that the problem cannot be resolved solely through a military response.”

Turkey has agreed to join the American-led coalition against ISIS but has resisted a full-fledged commitment until safe areas and a no-fly zone could be established along its borders with Syria and Iraq to help contain another influx of refugees if fighting intensifies. Turkey has taken in 1.6 million refugees.

The pope praised the country’s “generosity” in sheltering refugees, including Christians and Yazidis, and said it was the “moral obligation” of the international community to assist the government of Turkey help them.

Francis addressed a group of Turkish officials at Mr. Erdogan’s new, $600 million presidential palace. The pope’s soft voice echoed in the grandiose setting, which was in contrast to the pope’s image as a humble man of the people.

In a letter this month, a group of Turkish architects asked Francis to eschew the palace, which was built on protected forest land in defiance of rulings by several courts that the development was illegal. The Vatican dismissed the request and said the pope would be received wherever the government welcomed him.

The pope’s request to be picked up from the airport in a Fiat Albea, an Italian car manufactured in Turkey, was turned down for security reasons, and instead, a luxury Volkswagen ferried Francis to the mausoleum of Mustafa Kemal Ataturk, who founded the secular Turkish Republic, where the pope laid a wreath.

About 2,700 police officers in Ankara and 7,000 security officers in Istanbul are on duty to ensure the safety of the pope, the fourth to visit Turkey, during his stay. It was a Turkish nationalist, Mehmet Ali Agca, who shot Pope John Paul II in St. Peter’s Square in Rome in 1981.

Mr. Agca was in prison in Italy for 19 years before he was moved to a facility in Turkey to serve 10 years for the murder of a Turkish newspaper editor. He was released from prison in 2010.