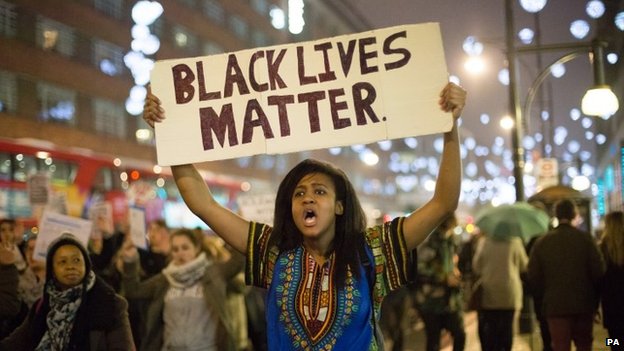 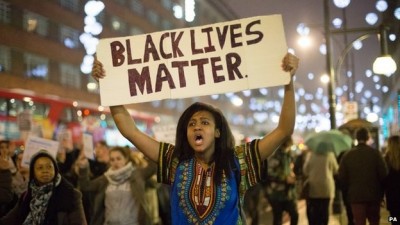 Hundreds of people have taken part in a demonstration outside the US embassy in London condemning the decision not to charge a police officer with shooting Missouri teenager Michael Brown.

Protesters observed a minute’s silence before marching down Oxford Street and making their way to Parliament Square.

They were joined by Carole Duggan, whose nephew Mark was shot dead by a Met police officer in 2011.

Police said the “impromptu march” ended peacefully at about 23:30 GMT.

Ms Duggan told the crowd on Wednesday evening “we know the pain of losing somebody at the hands of the police”.

She told them they were sending a message to the family of Michael Brown.

“That is why we stand in solidarity with the community of Ferguson. I feel they are very strong and brave people.”

She went on: “They’ve come to a point in Ferguson where there is no turning back.

“They have to carry on fighting. They have to see this through. We have to stand behind them because you know what happens there will eventually happen here.”

The US Embassy protest was organised by campaign groups Stand Up To Racism and London Black Revolutionaries, according to the Press Association.

It follows the decision not to charge white police officer Darren Wilson with the death of Michael Brown who was shot dead on 9 August in Ferguson.

After marching down Europe’s busiest shopping street, they gathered again in Parliament Square. No arrests were made.

The sister of Sean Rigg, who died at Brixton police station in 2008, was also at the rally.

Marcia Rigg said: “Burning and looting – we don’t condone these acts – but I for one, and I’m sure people around the world, understand the frustration and anger that the people are feeling when our loved ones are murdered on the streets.”