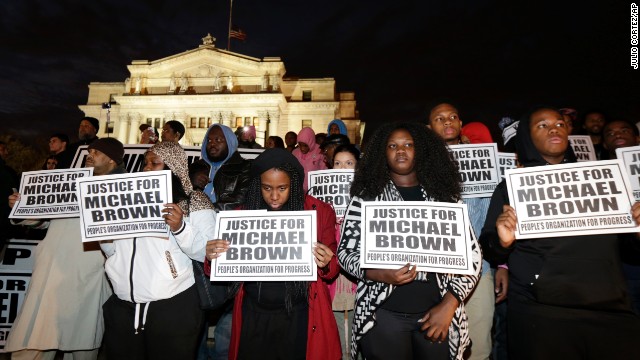 People hold signs during a rally in response to news of a grand jury deciding not to indict a Missouri police officer in the killing of an unarmed man, Tuesday, Nov. 25, 2014, in Newark, N.J. Organizers marched to the federal building in Newark in the wake of a grand jury decision on Monday not to indict Ferguson, Missouri, police officer Darren Wilson in the fatal shooting of unarmed 18-year-old Michael Brown. The National Action Network also is calling for protests in Atlantic City, Paterson and Camden. (AP Photo/Julio Cortez)
Share:

The sparks of outrage that started in Ferguson, Missouri, have ignited a firestorm of protests across the country.

But the national furor isn’t just about one grand jury’s decision on one shooting case. To many protesters, the death of unarmed black teenager Michael Brown — and the lack of an indictment for the officer who shot him — are symbolic of racial injustice in America.

“I think that it’s important for people to know that the decision not to indict (Officer) Darren Wilson means that the system does not value black lives,” one protester marching through Los Angeles told CNN.

More than 170 protests sprouted up across the country Tuesday. Some crowds blocked bridges, tunnels and major highways. But unlike the violence that erupted in Ferguson on Monday night, most of the demonstrations were peaceful.

In New York, a protesters spanning an array of races and ages filled Times Square with their hands up, some chanting, “Don’t shoot.” In Washington, a crowd including prep school students lay silently on a sidewalk, as if dead. And in Boston, even jail inmates joined in the protest silently from a window.

The Public Enemy anthem pumping from mounted speakers at a protest in downtown Atlanta captured the mood of the crowd of roughly 300 Tuesday night.

“Fight the Power,” the rapper’s voice shouted over the speaker. “Fight the powers that be. …”

Some Atlanta protesters held signs that read “Enough” and “We are all one bullet away from being a hashtag.”

“Seventy years ago, it was legal to kill black people,” Brown said, referring to the spate of lynchings that spread through the U.S. in the late 19th and early 20th centuries. “It’s essentially still legal.”

About 1,000 protestors marched through the streets of Boston, passing by the South Bay House of Correction where inmates looked on from windows — many of them holding their hands up in the air. On one window, someone had written “Mike Brown” in tape.

Even though police said 15 people were arrested, the gathering was peaceful. “I’m very proud of the young people here,” Police Superintendent in Chief William Gross told the Boston Globe. “Do you see any cars burning? Do you see any broken windows? No.”

“Folks have taken over the streets,” Older said. “It’s a beautiful thing to see.”

About 200 members of the Black Youth Project 100 started a 28-hour sit-in outside Mayor Rahm Emanuel’s office on Tuesday morning.

Why 28 hours? According to the group, a black person is killed by a police officer or a person protected by the state every 28 hours in America.

Some lay motionless on the City Hall floor, as if they had been shot.

But by Tuesday night, the protest was over. After City Hall closed for the day, police threatened to arrest those attempting to stay inside.

A stretch of the 101 Freeway in Los Angeles was temporarily shut down in both directions after protesters took road blocks from the streets and put them on the freeway, police said.

But protesters who gathered outside Los Angeles police headquarters demonstrated peacefully. “We have detained people. We don’t have any property damage to speak of,” Officer Jack Richter said. “We are letting (the people) exercise their constitutional rights.”

A woman in a group of protesters blocking an intersection was run over by a car.

The Star Tribune newspaper reported that the driver honked at the protesters before knocking a few people onto the hood of the car and apparently running over the woman’s legs. The woman was hospitalized with “minor injuries.”

A massive protest wound its way from Union Square to FDR Drive and to the United Nations, Times Square and Harlem.

“Now it’s not clear where we’re going,” said CNN’s Miguel Marquez, who was interviewing protesters as they continued marching after midnight.

One demonstrator said he didn’t even know about the protest until he saw it pass by his workplace on Times Square. He decided to join in.

“I just want to help bring about change … sometimes I am profiled based on my race,” said the protester, who is black.

“I think this is progress … now we’re going to make sure things are going to change.”

As they marched, some protesters chanted, “Mike Brown! Mike Brown!”

Police, who were nearby in large numbers, stayed back and let the marchers go.

Perhaps the most turmoil Tuesday night was in Oakland, California, where vandals smashed the windows of a car dealership and looted several businesses, including a T-Mobile cell phone store.

Some also set bonfires in the city. One row of bonfires stretched across a road, blocking off access.

At least one person was seen adding more items to the fires.

In Washington, protesters lay down on a sidewalk outside police headquarters as if dead, Nikki Burdine of CNN affiliate WUSAtweeted.

Some had handwritten notes on their chests: “Black lives matter.”