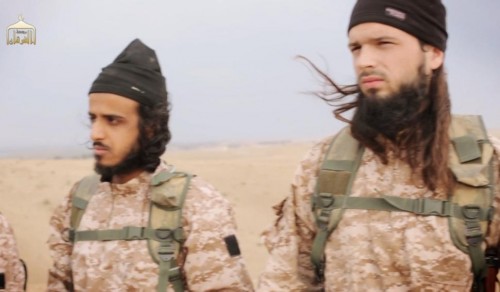 The video released Sunday shows members of ISIS, among them a jihadist believed to be French citizen Maxime Hauchard (R)
Share:

Several of the jihadis appearing in a new Islamic State video of the beheadings of a dozen captives, including American aid worker Abdul-Rahman Kassig, appear to be French and British. The European residence of the jihadis is likely to add further pressure on European governments to crack down on their citizens fighting in the Middle East – and further tension with between Europe’s governments and their Muslim populations.

The video, released Sunday, shows the execution of around a dozen men, including Mr. Kassig and several men that the jihadis identify as Syrian pilots and soldiers. Kassig, born Peter Kassig before converting to Islam during his captivity, was a former US Army Ranger who returned toSyria to provide humanitarian aid to those caught in the country’s civil war. He was kidnapped in October 2013.

Among the militants shown in the video, many of whom appear unmasked, are two men believed to be French, reports France24. One of the executioners appeared to be Abou Abdallah Al-Faransi, born Maxime Hauchard.

“He has been seen in several other IS propaganda videos,” said Wassim Nasr, a FRANCE 24 journalist and specialist in jihadist movements. “[Maxime] is known to have converted to Islam at the age of 17, but he has no prior criminal record in France, like around 50 percent of foreigners who have joined the group.”

French Interior Minister Bernard Cazeneuve told reporters that there is a “strong presumption” that the first man is Mr. Hauchard, a 22-year-old from outside Paris, writes Fox News.

The video also appears to include the man called Jihadi John, a fighter with a London accent who carried out the executions of several Westerners held by IS. The Belfast Telegraph describes John as “one of the world’s most wanted [since] the first beheading footage – the killing of US journalist James Foley – was broadcast on August 19.”

In addition, the Daily Mail writes that one of the other jihadis shown may be Nasser Muthana, a medical student from Cardiff, Wales. Although the man in the video cannot be confirmed to be Mr. Muthana, his father, Ahmed Muthana, told the Mail that it did appear to be Nasser Muthana. “I am trying not to believe it is my boy but it looks like him…. But I am not going to make excuses for him. He is a grown man and he must face up to what he has done.”

The prominence of so many European fighters in the video is certain to add further urgency to European governments’ controversial efforts to deal with the radicalization of their citizens. Just last week, British Prime Minister David Cameron announced new plans to empower officials to strip suspected British jihadis of their passports and tobar their return home. But the Guardian notes that Mr. Cameron’s plans may run afoul of international law.

Britain is signatory to two UN conventions on statelessness, and the former Conservative attorney general Dominic Grieve has previously said removing an individual’s passport on even a temporary basis is likely to be a legal non-starter.

The planned rules open the possibility of a suspect who refuses to return to the UK to face trial being left marooned outside the UK for an extended period, an arrangement that is unlikely to be popular if they are trapped on the European mainland.

And The Christian Science Monitor reported last month that similar French efforts to prevent French citizens fighting in the Middle East from returning home – along with the Western press’s focus on only the Western victims of jihadis – may in fact turn some French Muslims further toward radicalization.

“We have an impression that there are thousands of dead Muslims [in Iraq and Palestine] and no one cares,” [Omar Djellil, a Muslim activist in Marseille, France,] says. “And one Westerner is killed and the whole world mobilizes in a coalition.”

He understands the fear incited by the group. But he also says that cracking down on Muslims, as does an anti-terrorism law passed in France last month that doesn’t distinguish between Europeans who are extremists and those leaving for Syria for humanitarian reasons, only causes anger at the West to grow.

The Monitor reported last week that in one European city particularly affected by radicalization, Aarhus, the government is trying a new tactic to stop its residents from turning to jihad: counseling. Police in the Danish city, which has had some 22 of its residents travel to the Middle East in the past two years, are “help[ing] reintegrate returnees from Syria and Iraq who decide to come home and face public hostility.” Though the city does try to prosecute those who have committed crimes in the Middle East:

For the rest, they are contacted by police and a task force is formed that often includes friends and family members. With the help of scores of social workers and psychologists, the municipality and the regional police offer counseling, mentoring, and even assistance in finding jobs. Half of those who have left from Aarhus have been contacted by the city’s police. …

Some of the Europeans who have left for Syria have gone principally for humanitarian reasons, and only later have gotten radicalized. Not all have committed crimes. “We are not rolling out the red carpet to them,” Commissioner Ilum says, “but we believe it makes sense to approach these people. … We cannot lock them up just because they traveled to Syria.”

The mosque chairman agrees, and says that repressive approaches like refusing re-entry to their countries could backfire. “They need to know that they will be free to carry on with their lives as they were before traveling,” Mr. El Saadi says. “If these people can’t come back, they will become portable bombs wherever they are.”