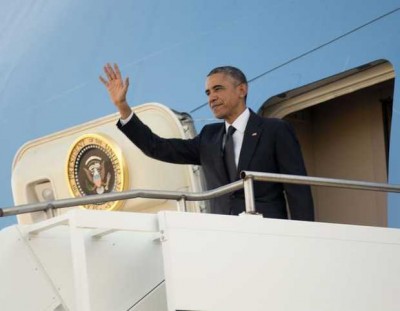 US President Barack Obama has thanked Australia for being a close friend and ally and has urged both nations to seize future opportunities in the Asia-Pacific.

The president on Saturday said despite wars raging across the globe, the world was a much safer place for people living in the most amazing time in history.

Asia was no longer run by dictatorships but democracies, and medical advances meant people were living longer and enjoying unprecedented freedoms.

“When you look at the facts, opportunities are limitless for this generation,” he told students at the University of Queensland on Saturday.

“You are living in an extraordinary time.”

President Obama said Australia and the United States could build a strong future in the Asia-Pacific, adding that distance was no longer a factor in bilateral ties.

There would always be a strong union between the US and Australia, forged by a commonality unique to both nations.

“There’s a bond between our two countries and Australia really is everything you’d want in a friend and an ally,” he said.

“We’re cut from the same cloth.”

Mr Obama said some people had been skeptical of the US “rebalancing” or pivot towards the Asia-Pacific announced three years ago.

But he said the US remained a Pacific power, seeking further integration in the region and more justice and peace.

“The United States has invested our blood and treasure to advance this vision,” he said.

He said alliances in the region, including with Australia, were “stronger than they have ever been”.

By the end of the decade, the US would have deployed the majority of its navy and air force to the region and would increase military training with its partners.

“We believe we’re stronger when we stand together,” he said.

He welcomed the rise of China, and promised both nations would co-operate more closely on military and economic matters and in tackling global challenges like Ebola and climate change.

But in this engagement the US would also encourage China to adhere to the same rules as other nations.

“We do not benefit from a relationship with China or any other country in which we put our values and our ideals aside,” he said.

Mr Obama pledged to tear down trade barriers, and promoted his country’s efforts to finalize the Trans-Pacific Partnership agreement.

The massive free trade deal – involving 12 nations including Australia – has been under negotiation for years.

He acknowledged progress had been slow, but promised once finalized it would open the region up to new economic opportunities.

“That’s why I believe so strongly we need to get it done, not just for our countries but the world,” he said.

Mr Obama said the US was committed to fighting terrorist group ISIL, the deadly Ebola virus, and in opposing Russia’s aggression against Ukraine.

“It’s a threat to the world as we saw in the appalling shoot down of MH17, a tragedy that took so many innocent lives among them your fellow citizens,” he said.

“Your ally and friend America shares the grief with these Australian families and we share the determination with your nation for justice and accountability.”

The Malaysia Airlines disaster in July killed 298 people, including 38 Australian citizens and residents, and soured Australia’s relations with Russia.

He also pledged $US3 billion to a global climate fund, stepping up pressure on other nations such as Australia to follow suit.

The United Nations Green Climate Fund, was set up to support developing nations dealing with the impacts of climate change, such as rising seas, higher temperatures and extreme weather.

The US contribution is the biggest country pledge so far.

“We will stand up for our gay and lesbian fellow citizens because they need to be treated equally under the law,” Mr Obama said.

His wide-ranging 30-minute speech was laced with humour and optimism for the future. His opening remarks praised Queensland and the university’s work.

“This university is recognized as one of the world’s greatest institutions of science and teaching,” he said, pointing out its climate change work among other things.

“In fact last year I even tweeted one of your studies to my 31 million followers on Twitter.

“Just bragging a little bit. I don’t think that’s as much as Lady Gaga but it’s still not bad.”

He joked about Qld being “beautiful one day, perfect the next” and that “When I arrived I needed some XXXX.”

“You have some?” he asked someone in audience.

He received a standing ovation from the audience filled with students and a number of dignitaries, including Queensland Premier Campbell Newman.
Yahoo/AU. News