ISIS plans to mint its own currency 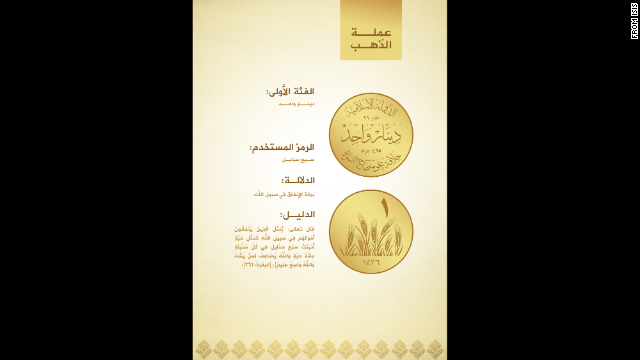 ISIS is planning to mint its own currency in gold, silver and copper, the group said Thursday.

Its aim is to stay away from the “tyrant’s financial system,” ISIS said in a statement. It said it would issue another statement to explain the new currency’s exchange rate, and where it can be found.

The currency will include seven coins: two gold, three silver and two copper.

The move is “purely dedicated to God” and will remove Muslims from the “global economic system that is based on satanic usury,” ISIS said.

The terror group, which calls itself the Islamic State, has seized large swaths of territory in Iraq and Syria.ISIS currency

It seeks to establish an Islamic caliphate in the region.

He said its funding comes from oil, ransom payments, taxes and the sale of stolen artifacts.

“This is the wealthiest terrorist organization that the world has ever known, and so with that kind of money it’s hard to understand — what’s the potential? What could they do with that?” Gurule said.

He added: “The difficulty, of course, with that kind of money is you can’t just put that money in shoe boxes and place it under your mattress. It has to enter into the financial system at some point in time. So I think the Treasury needs to be focusing on banks — banks in Qatar for example, and in Kuwait — that may be the recipients and handling money for ISIS.”

Won’t work
If history is any guide, the new ISIS plot to create its own currency is destined to fail.
That’s according to gold and currency expert Axel Merk of Merk Investments in San Francisco.
Merk says the plan to use the metal currency could work in theory, but it won’t last long.
“They realize the international banking system is not very open to them,” he said. “If they use paper currency, they’ll have rampant inflation.”

The golden flaw
The challenge, Merk claims, will be getting citizens to accept the monetary system and keep it going. He said it’s likely that people in ISIS-controlled territory will chip away at the coins in an effort to extract the worth of the metals. They’re also likely to hoard them.

Eventually, ISIS will run out of gold to finance its activities and will be forced to lower the metal contents in the coins, which would render them useless. That’s been the case throughout history with ancient coin systems, Merk claimed.

“They’re going to have to cheat and print money like every central bank does,” he quipped.

On the other hand, ISIS rules by violence, and citizens might be scared not to accept whatever form of money ISIS puts out.

“They chop people’s heads of if you don’t accept…it’s the currency of the land,” he said.

Economic woes
ISIS may also face problems maintaining its currency going forward as the U.S. led airstrikes intensify. While the group is flush with cash from oil sales, ransoms, and taxes, there are indications that the U.S. led airstrikes are taking a toll by limiting its ability to operate. Additionally, countries in the Middle East are working towards a plan to cut off ISIS from raising funds from wealthy sympathizers in the region.

“A vibrant currency requires a vibrant economy. You don’t get one without the other.” said Merk.