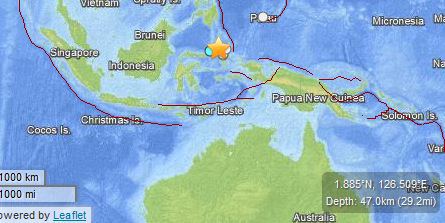 Small waves generated by the undersea quake were detected in several parts of the sprawling archipelago, local authorities said, although there were no reports of casualties or major damage and the tsunami warning was lifted after a short while.

Nevertheless, the prospect of a major tsunami set nerves on edge in one of the most seismically active countries in the world, almost a decade after quake-triggered destructive waves devastated western Aceh province.

The tsunami of December 26, 2004, left more than 170,000 people dead in Aceh, on Sumatra island, and tens of thousands more in countries with coasts on the Indian Ocean.

Saturday`s tremor struck northwest of the town of Kota Ternate, at 0231 GMT, the US Geological Survey said. It was followed by a series of aftershocks that measured between magnitude 4.3 and 5.8, the USGS said.

The centre also warned of small tsunami waves in the Philippines, Japan, Taiwan and islands in the South Pacific.

On the tiny Sangihe Islands close to the epicentre in Indonesia, people ran out of their homes when the quake hit, Toni Supit, head of the islands` Sitaro district, told AFP.

“People in coastal areas felt the strong quake, which lasted for quite some time, and they immediately went to the sea to see if the water was receding abnormally, which is a sign of an incoming tsunami,” he said.Tsunami waves nine centimetres high were detected at Jailolo on Halmahera island, in the Maluku Islands, the meteorological agency said. Tiny waves were also detected in Tobelo on Halmahera, and in Manado, on nearby Sulawesi island.

An agency official on Sulawesi said early reports indicated that cracks had appeared in the walls of some houses after the quake, although full damage reports had yet to come in.

The Pacific Tsunami Warning Center said earlier that waves up to one metre high could hit parts of Indonesia, while waves below 30 centimetres were forecast for the coasts of the Philippines.

Indonesia`s meteorological agency warned people in the northern Maluku Islands and in the north of Sulawesi in particular to stay away from the coast.

“We are telling (local communities) to have a tsunami watch in areas along the coast,” he said, but added that no evacuation orders had been issued and the tsunami waves were not expected to be high.

Around two hours after the quake, the warning centre said there was no longer a tsunami threat.

“The tsunami threat from this earthquake has now mostly passed. Any remaining threat should be evaluated by local authorities in impacted areas,” it said.

Indonesia sits on the Pacific “Ring of Fire” where continental plates collide, causing frequent seismic and volcanic activity, and has been hit by numerous deadly earthquakes over the years.

A 6.1-magnitude quake that hit inland in Aceh in July last year left at least 30 people dead and thousands homeless. It caused a mosque to collapse in one village, killing six children as they took part in a Koran reading session.