World’s first solar road will open in Holland this week 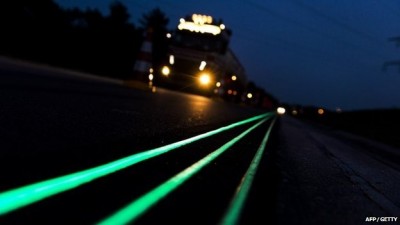 Dubbed SolaRoad, the 230-foot pilot lane—located in Krommenie in North Holland—consists of 8-by-11-foot prefab concrete slabs, into which solar cells are fitted underneath a layer of tempered glass.

It’s that glass, however, that provides the greatest challenge: It must be translucent enough for sunlight to penetrate, as well as skid resistant and strong enough to carry large volumes of vehicles.

In partnership with independent research organization TNO, the SolaRoad project has been under development since 2009, with the goal to realize “the dream that large parts of the road surface in the Netherlands will act as a large solar panel,” according to the project website.

Over time, that power will be put to use in practical applications like street lighting, traffic systems, electric cars driving on the surface, and even households.

“The idea behind SolaRoad is simple: sunlight falling on the road surface is absorbed by solar cells and converted into electricity—the road surface acts as a large solar panel,” the site said. “The electricity generated in this way will find practical applications in street lighting.”

During the three-year SolaRoad trial period, tests will be performed to determine whether the street behaves correctly, how much energy it produces, and what locals think of riding on it.

“This could be a breakthrough in the field of sustainable energy supply,” TNO’s Sten de Wit said in a statement. “In particular, if the road concept will develop into a system, with which the generated electricity is transported to the vehicles driving on the road. Subsequently, a big step toward an energy-neutral mobility system will be possible.”