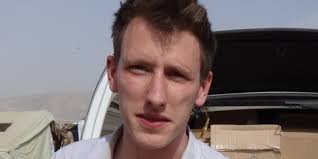 Tripoli, Lebanon – He was an unusual sight in this embattled but historic Lebanese port city, a Westerner who wasn’t a journalist, a young man driven to provide humanitarian help to the unremitting flow of wounded and displaced from Syria’s civil war.

“He was full of sympathy for people, and he had some useful skills,” recalled Dr. Ahmed Obeid. “He was very courageous. Maybe that was his undoing in the end.”

The Syrian physician was among the friends of Peter Kassig, a U.S. aid worker held hostage for more than a year in Syria, who gathered here recently to plead publicly for his release. Kassig’s Islamic State captors have threatened to behead him.

The hostage’s friends spoke inside Tripoli’s ancient quarter in an Ottoman-era building that has been converted to a bed and breakfast, though visitors are relatively few at the moment, despite the charms of the medieval-era Old City and its labyrinthine streets and alleys. The sectarian-fueled war in neighboring Syria, now in its fourth year, has hit Tripoli hard.

Calm has prevailed for the last week or so.

Inside the airy stone building where Kassig’s friends gathered, banners urged justice for “our brother.” A poster-sized photo showed a lanky, smiling Kassig delivering aid to needy Syrians. It was evident that he had found some fulfillment in humanitarian work.

Kassig, 26, a former U.S. Army Ranger and Iraq war veteran, converted to Islam while in custody and changed his name to Abdul-Rahman Kassig. He was seen last month in an Islamic State video, wearing an orange jumpsuit as a masked, knife-wielding assailant boasted that the Indiana native could be the next Western hostage in line for a grisly execution.

Kassig developed strong ties to Tripoli, a former Phoenician port and Crusader stronghold that is a bit rough at the edges these days, having lost much of its commercial and economic vitality to the capital, Beirut, about 45 miles south on the coastal highway skirting the Mediterranean.

Islamic State has beheaded two U.S. journalists, James Foley and Steven Sotloff, and a pair of British aid workers, calling the killings retaliation for Western intervention against the Al Qaeda offshoot in Syria and Iraq. The friends who spoke this weekend stressed Kassig’s dedication to the Syrian people and his conversion to the Muslim faith.

Their hope, perhaps a faint one, is that their message will help persuade the militants to spare Kassig, though emotional entreaties in behalf of other captives have failed to save their lives.

“The Islamic State thinks Abdul-Rahman is a spy or with the CIA, just because he is an American,” said a fellow aid worker, Abed Homsi, who uses a pseudonym for safety purposes. “But it’s not true…. He used to say that not every American supports the policies of the American government.”

Kassig journeyed to Lebanon on a personal quest, his family says. He arrived in 2012 during spring break from Butler University in Indianapolis, according to his family, and later began doing regular aid work with Palestinian refugees and Syrian war victims. He also befriended journalists and others in Beirut, home to a lively expatriate community, including many young Westerners with an interest in learning Arabic and experiencing the Middle East. Relatively few become as committed as Kassig did.

“Like many people his age, our son had spent his late teens and early 20s searching for his place in the world,” Kassig’s parents said in a statement last month, after the video of their son in captivity surfaced on the Web, breaking a yearlong news blackout about the case.

Kassig found a calling in Lebanon. He linked up with a humanitarian network in Tripoli, home to multitudes of displaced and wounded from the Syrian conflict. A trained emergency medical technician, Kassig would bring medicines and medical supplies into Lebanon, and also helped teach first-responder skills to volunteers, according to colleagues here. Many commented on his singular dedication and his connection with victims and co-workers, despite language and cultural barriers.

“He knew how to put on a neck brace, how to stop bleeding, how to treat the wounded,” recalled Obeid. “He was someone who shared our joys and sadnesses.”

The organization, funded by private donors in the United States, especially friends and relatives of Kassig, provided trauma kits, basic medicines and first aid training and trauma care. It was one of a number of small groups providing aid in Syria despite the risks. Friends here say they often urged Kassig to not enter Syria, fearing he could be killed in the conflict or taken hostage as the armed opposition became increasingly radicalized.

“We all told him it would be better if he didn’t go inside,” recalled Firas Agha, another former colleague.

But, acquaintances said, Kassig felt it necessary to be present where the need was greatest.

Kassig was taken captive Oct. 1, 2013, according to his family, while en route to the eastern Syrian city of Dair Alzour, an Islamic State stronghold. He had made several trips into Syria before that, colleagues say.

His Syrian friends say Kassig seldom spoke about his time in the U.S. military, which lasted for 15 months, including a three-month stint in Iraq. He received a medical discharge in September 2007 as a private first class, according to Pentagon records. But some friends discerned a need on Kassig’s part to do something to make up for the carnage of battle that he had witnessed firsthand in Iraq. He rejected conflict as a solution.

“He felt strongly that to heal the wounds of war you had to help people,” said Michael Downey, a journalist and friend of Kassig’s. “He is one of the most selfless people I have ever known.”

“He felt strongly that to heal the wounds of war you had to help people,” said Michael Downey, a journalist and friend of Kassig’s. “He is one of the most selfless people I have ever known.”

Like his friends in Lebanon, Kassig’s parents have also made public appeals, stressing their son’s conversion to Islam and his dedication to Syria’s wounded and needy. The family released family photos, including snapshots of Kassig fishing with this father, Ed, on the Ohio River in 2011 and, as a youth, standing with his mother, Paula, alongside a waterfall during a family camping trip. The images of joyful family moments seem a world away from current circumstances.

“I am obviously pretty scared to die but the hardest part is not knowing, wondering, hoping and wondering if I should even hope at all,” Kassig wrote to his parents in a letter carried out of Syria by a freed hostage and made public by the family. “Just know I’m with you. Every stream, every lake, every field and river. In the woods and in the hills, in all the places you showed me. I love you.”