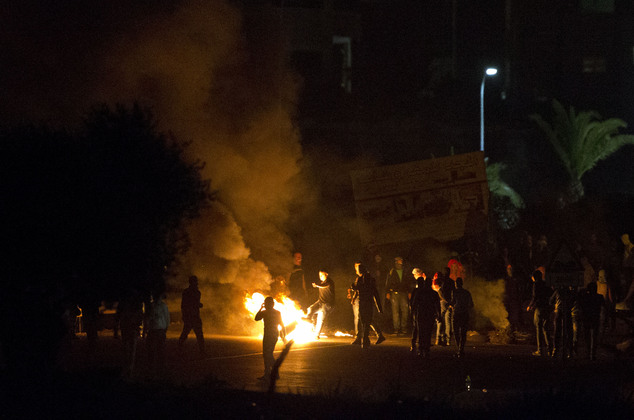 Arab youths clashed with Israeli police in the northern Israeli town of Kfar Kana, burning tires and hurling firecrackers at the security forces. It was the third straight day of unrest in the town following the shooting death of a local man by an Israeli police officer. Video of the incident indicate the man was walking away from the officer when he was shot. (AP Photo/Ariel Schalit) November 10, 2014
Share:
The Palestinian president on Tuesday accused Israel of provoking a “religious war” as new violence between the sides broke out in the West Bank, leaving a Palestinian man dead, amid mounting concerns that the long-running conflict is entering a new and dangerous phase.

Mahmoud Abbas blamed the latest tensions on a series of visits by Jewish worshippers to Jerusalem’s most sensitive holy site. The visits to the contested site have helped fan strife in a region already on edge following last summer’s bloody war in the Gaza Strip and the earlier failure of U.S. Secretary of State John Kerry’s Mideast peace efforts.

Abbas’ remarks — at a ceremony marking the 10th anniversary of the death of Palestinian leader Yasser Arafat — came as Israeli troops shot and killed a Palestinian demonstrator in clashes in the West Bank on Tuesday.

The shooting happened a day after a Palestinian from the West Bank city of Nablus stabbed and killed a 20-year-old Israeli soldier at a crowded Tel Aviv train station and another Palestinian assailant stabbed three people at a bus stop next to a West Bank settlement, killing a 25-year-old Israeli woman and wounding two others.

Much of the recent unrest has stemmed from tensions surrounding the holy site in Jerusalem’s Old City, known to Jews as the Temple Mount and Muslims as the Noble Sanctuary. It is home to the Al-Aqsa Mosque and the gold-topped Dome of the Rock, the third-holiest site in Islam after Mecca and Medina in Saudi Arabia. It is also revered as the location where the ancient Hebrew temples once stood and today is considered the most sacred place in Judaism.

Palestinians in east Jerusalem have carried out violent protests, alleging that Jewish zealots are secretly trying to gain control of the site. The Palestinians claim east Jerusalem, captured by Israel in 1967, as their capital.

While Jews are permitted to visit the hilltop compound, they are not supposed to pray. Palestinian fears have been heightened by an increased number of visits by Jewish hard-liners and calls by members of Netanyahu’s governing coalition for an expanded Jewish presence there. They also object to Israeli restrictions on Muslims entering the compound. Israel says the restrictions are security measures.

In an address to thousands of people at his West Bank headquarters, Abbas accused Israel of trying to divide the mosque compound, comparing it to the experience of a holy site in the West Bank that was split between Jewish and Muslim sides after an Israeli settler gunned down 29 Muslim worshippers there 20 years ago.

“Leaders of Israel make a mistake if they think they can divide the Al-Aqsa Mosque as they have done in Ibrahimi Mosque, and they will retreat from this one too,” he said.

“By dividing the mosques, they are leading us to a religious war, and no one, Muslim or Christian, will accept that Jerusalem be theirs,” Abbas said. “Jerusalem is our capital, and there will be no concessions.”

Following Monday’s deadly attacks in the West Bank and Tel Aviv, Israel said it was stepping up security in an attempt to forestall further incidents.

Police spokesman Micky Rosenfeld said several police units had been mobilized in major Israeli cities, including Tel Aviv and Jerusalem, and were being deployed “in public places.”

The Israeli military said it sent reinforcements to the West Bank, following what it called “new security assessments.”

“I think these reinforcements will calm the situation down,” said Defense Minister Moshe Yaalon.

In new fighting, Israeli troops shot and killed a Palestinian demonstrator in clashes in the West Bank on Tuesday.

Tuesday’s clashes erupted near the city of Hebron where about 150 Palestinian demonstrators were throwing rocks and firebombs at Israeli soldiers, the army said.

The soldiers’ attempts to disperse the crowd using tear gas and rubber bullets failed, prompting the troops to open fire, the military said.

The Mezan Hospital identified the dead man as a 21-year-old resident of the al-Aroub refugee camp near Hebron.

The new spate of violence comes amid rising tensions spawned by conflicting claims to the Jerusalem holy site and the aftermath of this summer’s bloody Gaza war, in which more than 2,100 Palestinians and 72 people on the Israeli side were killed.

Complicating the situation, tensions also spiked following the killing of an Israeli Arab by a policeman in the northern Israeli town of Kfar Kana on Saturday.

Israeli media debated whether the country was on the verge of a new Palestinian uprising or intifada, similar to those from the late 1980s and the first decade of the 2000s that took hundreds of lives.

“This is the same soundtrack that we all remember from the days of the intifadas,” wrote Alex Fishman in Tuesday’s edition of Yediot Ahronot newspaper.