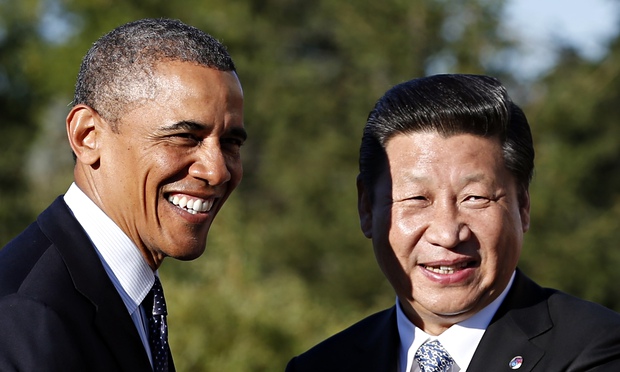 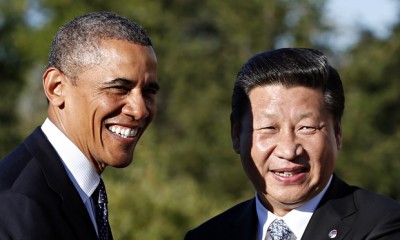 China’s President Xi Jinping has a new vision for Asia, with his country at the center of affairs. It embodies what he calls the “Asia-Pacific dream” and two new “Silk Roads” and is backed by tens of billions of dollars in infrastructure investment, a proposed free-trade zone and vigorous diplomatic engagement.

It is already shaping up to be a powerful riposte to President Obama’s strategic rebalance toward Asia, often referred to as the “pivot.”

Xi is using the Asia Pacific Economic Cooperation (APEC) summit as the coming-out party for his Asian vision, just as China used the 2008 Olympics as its broader global coming-out party.

Indeed, in both Herculean preparation and glitzy execution, the summit was reminiscent of the Games six years ago, with schools, offices and factories closed to combat the smog, and a similarly spectacular fireworks display mounted over Beijing’s Olympic Park.

But behind the show of organizing power was a more serious message, spelled out by Xi to hundreds of business executives at the summit: China’s economic development is the key to regional prosperity. As he put it: “We are duty-bound to create and fulfill an Asia-Pacific dream for our people.”

At home, Xi has made the achievement of a “China dream” his signature goal, a vision that combines economic prosperity with a strident new nationalism. Now, he aims to project that vision onto a broader stage.

Obama came to the APEC summit promoting the Trans-Pacific Partnership (TPP), a putative free-trade area stretching from Chile to Japan that could encompass 800 million people and 40 percent of the global economy — but would exclude China. But negotiations over TPP have floundered, observers say, not least because Obama appears to have done little to win over Democrats to the cause.

On Tuesday, Xi countered by pushing a free-trade deal of his own, the Free Trade Area of the Asia Pacific (FTAAP), which he said should be “vigorously promoted” to bolster the global economic recovery.

But it is in terms of cold, hard cash that China really seems to be trying to trump the United States. It has enlisted 21 countries to join a new Asian Infrastructure Investment Bank and promised to provide half of its $50 billion in start-up capital. Last weekend, Xi also announced a $40 billion fund to promote his Silk Road vision and bolster trade links among Asian economies.

The Silk Road Economic Belt traces the old caravan trails past China’s western deserts toward Central Asia nations and into Europe. A 21st century Maritime Silk Road is supposed to follow ancient trade routes toward South Asia, Africa, the Persian Gulf and the Red Sea. The two routes are supposed to ultimately meet in Venice.

As secretary of state, Hillary Rodham Clinton promoted her own vision of a “New Silk Road” that was supposed to place Afghanistan at the center of a new regional trading network, but little progress was made, and these days the phrase seems to be gathering dust.

Obama administration officials try to counter talk of competition with their own narrative of mutually beneficial cooperation that can help bring regional prosperity.

“It’s not a zero-sum game,” Obama told business executives here on Monday. “One country’s prosperity does not come at the expense of another. The U.S. has helped integrate China into the global economy, and it’s in America’s best interest and in the world’s best interest. We want China to do well. We compete for business, but we also seek cooperation on a broad range of shared challenges.”

But it is no secret that senior U.S. officials have lobbied hard behind the scenes against the Asian Infrastructure Investment Bank and China’s FTAAP trade vision — prompting China’s nationalist Global Times newspaper to accuse Washington of giving the impression that it was “afraid of competition” with China.

“China has no intention of dominating the Asia-Pacific region,” it wrote Tuesday, but added: “It is also unlikely to follow U.S. leadership as far as its core interests are concerned.”

Yet Beijing will not have everything it own way. Experts warn that money cannot buy love and that Chinese money seldom comes with no strings attached.

Indeed, Xi’s “Asia Pacific dream” is arguably no less nationalistic than his “China dream” has proved. Beijing, experts say, is unlikely to be letting up in the way it promotes its territorial claims with neighboring countries and with Chinese investment comes the implicit message: Beijing is boss, and you’d better believe it.

At times, that can upset the party. In September, Xi visited India, met the new prime minister, Narendra Modi, and talked grandly about a new era in relations between the two ancient civilizations. At the same time, however, hundreds of Chinese troops massed on the disputed Himalayan border in what New Delhi saw as a clear threat, driving the Indian media into a frenzy and undermining much of the diplomatic glad-handing.

China has used the APEC summit to try to calm regional nerves. A frosty handshake and first meeting with Japanese Prime Minister Shinzo Abe was part of the effort. Bilateral engagement has resumed with Vietnam after tensions emerged earlier this year when China towed an oil rig into disputed waters of the South China Sea.

Beijing has even kept relations distinctly cool with North Korea, partly in an attempt to woo South Korea, and has been rewarded with a free trade deal, “substantially” concluded on Monday.

Obama will fly off to Burma after this summit. Not to be outdone, China has reportedly invited Nobel Peace Prize winner Aung San Suu Kyi to come on an official “goodwill visit” next month.

But Beijing’s moderation over its territorial claims is likely to be “transitory,” according to Yanmei Xie, a senior China analyst at the International Crisis Group, calling it “a repeat of a pattern dating back to the 1990s that alternates between assertive — at times aggressive — actions to clinch control of islands and waters and moves to dial down tensions, manage diplomatic fallout and consolidate gains.”

“Unsurprisingly then, the temporary calm is unlikely to stop the regional arms race already underway or change underlying strategic rivalries and attendant hedging,” she said.

In other words, the nations of Asia will still be keeping a careful eye on China, and many will continue to look to the United States as an important counterweight and ally.

In ancient times, China saw itself as the center of the world, the “Middle Kingdom” surrounded by vassal states, but if that is Xi’s dream, it is unlikely to be shared by the Asia-Pacific region.

“On the one hand, these economic ties are helpful to ease political threats and promote cooperation — but they will make some countries feel threatened,” said Zhang Mingliang, an expert on Southeast Asian studies at Jinan University in Guangzhou. While China stresses peaceful development, he said, its Southeast Asian neighbors have never been completely convinced and will remain alert to any hints of “Chinese hegemony.”