UK to boost its military role in Iraq 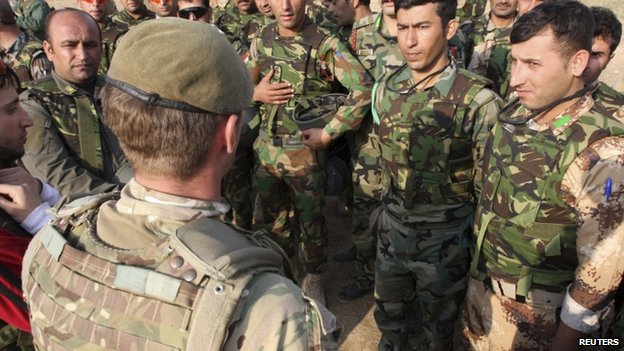 The UK is to boost its military role in Iraq to help local forces in their efforts to halt the advance of Islamic State extremists.

Military trainers will be sent within weeks to work at a US headquarters that has been established in the capital.

Large swathes of Syria and Iraq are currently under the control of IS extremists.

Defence Secretary Michael Fallon said the limited mission would not lead to the deployment of combat troops.

British forces were pulled out of Iraq in 2011, eight years after the mission that brought down Saddam Hussein.

A dozen British trainers had already been deployed last month to work with Kurdish forces in the northern city of Erbil.

The UK launched its first air strikes against IS targets in Iraq on 30 September – four days after Parliament approved military action.

Pressure to provide more support to new Iraqi prime minister Haider al-Abadi to reclaim territory in the north and west has been growing.

The US has agreed to send around 500 soldiers to Iraq and elsewhere in the region, with the aim of retraining the Iraqi army.

Speaking during a visit to Baghdad, Mr Fallon told the BBC that Iraqi forces were making some progress in halting the advance of Islamic state, but they urgently needed more help from Britain.

He said: “We are going to be stepping up our training effort. I can’t give you precise numbers. I’m here to evaluate training needs and there are areas of expertise, particularly in counter-IED [improvised explosive devices] and roadside car bombs, where we can help from our experience in Afghanistan.

Labour’s Andy Burnham backed the move, saying: “It is an advisory role and that’s right at this stage.”

The UK is also preparing to increase the number of drones it is using in the region to provide further intelligence, surveillance and reconnaissance assistance to Iraqi forces.