Bomb defused by the army in a Hezbollah stronghold in s. lebanon 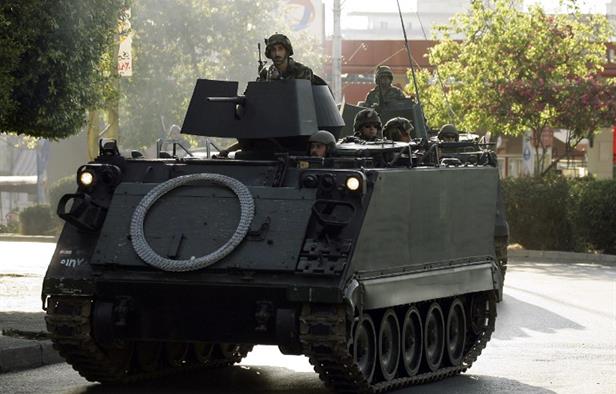 Lebanese army tank seen in Haret Saida in sidon, south Lebanon
Share:
The Lebanese army defused on Sunday an explosive device that was placed near a Ashura gathering in the predominantly Shiite Sidon suburb of Haret Saida, a Hezbollah stronghold in south Lebanon, according to report by NNA

Later on Sunday, the Army Command issued a statement saying:
“Following search and investigations, an army intelligence patrol discovered at 6:00 pm near the Sayyed al-Shohada complex in Haret Saida an explosive device consisted of 500 grams of TNT, a hand grenade and an electric detonator,” the statement said.

The army noted that the bomb was set for remote detonation, adding that a probe has been launched into the incident.

Security measures have been beefed up in the country ahead of the tenth day of Ashura, which will be commemorated in mass rallies on Tuesday .

Security concerns prompted Hezbollah and AMAL Movement members to monitor security forces checkpoints in Beirut’s southern suburbs, particularly in neighborhoods where the congregations are being held.

The Day of Ashura is on the tenth day of Muharram in the Islamic calendar and is commemorated by Shiite Muslims as a day when Hussein ibn Ali, the grandson of Muhammad met his death at the Battle of Karbala on 10 Muharram in the year 61 AH or October 10, 680 AD.