Supply rocket for space station explodes on liftoff in U.S. 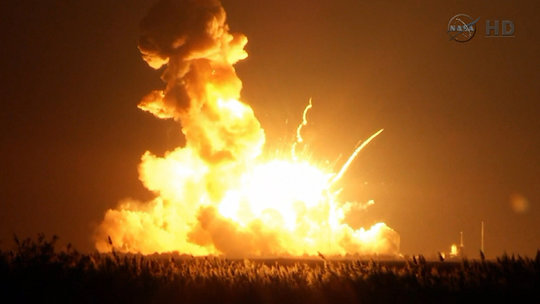 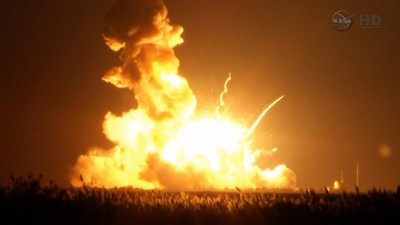 An unmanned Antares rocket exploded seconds after liftoff from a commercial launch pad in Virginia on Tuesday, marking the first accident since NASA turned to private operators to deliver cargo to the International Space Station.

The 14-story rocket, built and launched by Orbital Sciences Corp, blasted off its seaside launch pad at the Wallops Flight Facility at 6:22 p.m. EDT/2222 GMT carrying a Cygnus cargo ship bound for the space station. It appeared to burst into flames moments later, then plunged to the ground in a huge ball of fire and smoke, but authorities said no one was hurt.

The six crew members in orbit aboard the space station – two NASA astronauts, one from the European Space Agency and three Russian cosmonauts – were informed of the accident, NASA spokesman Dan Huot said.

With a Russian cargo ship due to reach the space station on Wednesday shortly after a separate launch from Kazakhstan, the loss of the Cygnus vessel posed no immediate supply shortage for the orbiting team.

“There was no cargo that was absolutely critical” aboard Cygnus, NASA Associate Administrator William Gerstenmaier said.

Orbital Sciences stock fell 15.5 percent to a two-month low of $25.65 in after-hours trading.

The cause of the mishap was not immediately known, Huot said. He said there were no reports of any personnel in the vicinity of the explosion.

Orbital Sciences said in a statement: “We’ve confirmed that all personnel have been accounted for. We have no injuries in the operation today.”

The spacecraft was carrying “some classified cryptographic equipment, so we do need to maintain the area around the debris in a secure manner,” said Mike Pinkston, the company’s Antares program manager.

The National Security Agency had no immediate comment on the classified equipment reported to be aboard the cargo ship.

NASA launch control said damage appeared to be limited to the launch facility and rocket. The Antares rocket has been launched successfully on four previous missions.

“This has been a lot of hard work to get to this point,” Orbital Sciences Executive Vice President Frank Culbertson told the launch team just before liftoff.

Footage of the launch broadcast on NASA TV showed the Antares rising slowly into the night sky as flames suddenly engulfed the rocket, from the bottom to the top, and the vehicle sank back downward in an enormous conflagration.

Ronda Miller, manager of the Ocean Deli in Wallops Island, Virginia, told Reuters she felt the force of the blast from the eatery, about 5 miles (8 km) from the launch pad.

‘IT SHOOK THE WHOLE BUILDING’

“We were standing outside waiting for it to launch and we saw bright red, and then we saw a big black cloud, and it shook the whole building where we work at,” Miller said. “And then I came back in to work and seen fire trucks going every which way.”

The launch had been delayed one day after a boat sailed into a restricted safety zone beneath the rocket’s intended flight path.

Virginia-based Orbital Sciences is one of two companies hired by NASA to fly cargo to the station after the space shuttles were retired. Tuesday’s planned flight was to be the third of eight under the company’s $1.9 billion contract with NASA.

The second U.S. supply line to the station is run by privately owned Space Exploration Technologies, or SpaceX, which is preparing for its fourth flight under a separate $1.6 billion NASA contract.

The Cygnus capsule was the first of two cargo ships scheduled to head to the space station this week. Russia is preparing to launch a Soyuz rocket and Progress freighter from the Baikonur Cosmodrome in Kazakhstan on Wednesday.

Cygnus was to loiter in orbit until Nov. 2, then fly itself to the station so astronauts can use a robotic crane to snare the capsule and attach it to a berthing port. The station, a $100 billion research laboratory owned and operated by 15 nations, flies about 260 miles (418 km) above Earth.

In addition to food, supplies and equipment, the Cygnus spacecraft was loaded with more than 1,600 pounds (725 kg) of science experiments, including an investigation to chemically analyze meteors as they burn up in Earth’s atmosphere.

The Cygnus also carried a prototype satellite owned by Redmond, Washington-based startup Planetary Resources Inc., which is developing technology to mine asteroids. The satellite, designated A3, was to be released into space by a commercially owned small spacecraft launcher aboard the station.

Orbital Sciences is in the midst of merging with Alliant Techsystem Inc’s Aerospace and Defense division, a deal that analysts expect to close sometime early next year. The company is competing for a number of NASA missions or projects that will help fuel revenue over coming years.

The defense sector in general has been hit by cutbacks in federal spending in past years, but of the seven analysts who track Orbital Sciences, five had a “buy” or “strong buy” rating on the stock, and none recommended a “sell” before the mishap.