Lebanon FM: Time to send some Syrian refugees back 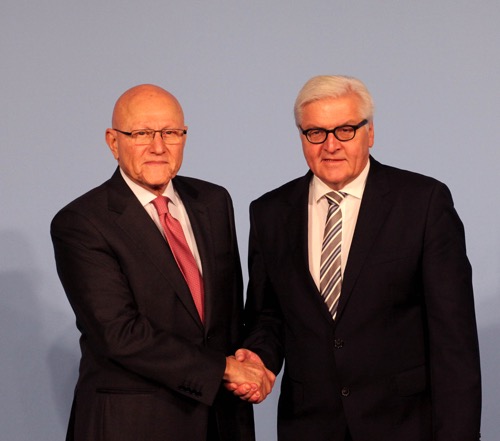 German Foreign Minister Frank-Walter Steinmeier, right, welcomes Lebanese Prime minister Tammam Salam to the conference on the refugee situation in Syria and neighboring countries in Berlin, Tuesday Oct. 28, 2014. Foreign ministers and other representatives from 40 nations are meeting in Berlin to coordinate international support for refugees from the Syrian civil war. There are more than 3 million Syrian refugees from the conflict, mostly in neighboring countries. Another 6 million have been displaced within Syria, making it one of the world’s worst humanitarian crises. Lebanon alone has at least 1.1 million Syrian refugees.
Share:

Syria’s neighbors sounded the alarm Tuesday over the non-stop flow of refugees from the country’s 3½-year civil war, warning that the massive influx was straining their resources and threatening political stability.

Lebanon alone, with its population of just 4.5 million, has taken in about a third of the 3.3 million people that have fled Syria because of the war. Another 6.5 million people are displaced within Syria itself.

“The massive influx of Syrians into poor communities totally unprepared to cope with such a sudden burden has had a destabilizing effect,” Lebanese Prime Minister Tammam Salam told a conference in Berlin of envoys from 40 nations.

In addition to placing huge strains on the country’s hospitals, schools and other institutions, the refugees also are taking jobs from Lebanese workers, creating resentment, he said.

Jordan warned of similar issues, while Turkey’s deputy foreign minister, Naci Koru, said his country had spent $4 billion on Syrian refugees so far and received only $250 million from the international community.

German Foreign Minister Frank-Walter Steinmeier said his country had taken in 70,000 Syrians since 2012 and was prepared to do more but urged other European nations to also open their borders to Syrian refugees.

Germany announced it would increase its assistance to Syria’s neighbors to 500 million euros ($637 million) over the next three years and the U.S. pledged to send an additional $10 million.

Anne Richard, an assistant U.S. secretary of state, urged governments in the region to continue accepting refugees despite the strains. But Lebanon’s foreign minister made clear that his country’s ability to host refugees was exhausted and suggested it’s time to consider sending some Syrians back.

U.N. refugee chief Antonio Guterres warned that any repatriations would need to be voluntary, noting that the now-embattled Syrian city of Kobani had once been considered safe.

“Worse than being a refugee is to be displaced in an area where the fighting is going on,” Guterres said.