Is the world ready for a third Bush ? 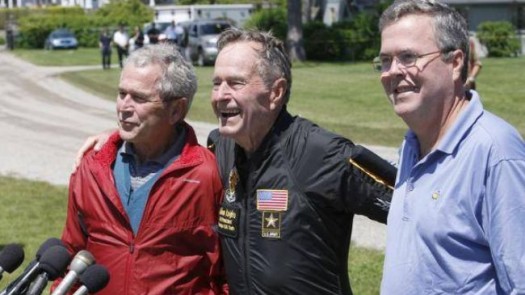 Yet another Bush family member is weighing in on whether or not former Florida Gov. Jeb Bush will run for president in 2016.

“I think it’s more than likely that he’s giving this a serious thought in moving forward,” his eldest son, George P. Bush, told ABC on Sunday.

“If you had asked me a few years back, I would’ve said it was less likely,” said Bush, who himself is running for political office for the first time as Texas land commissioner.

George P. Bush is the fifth member of his father’s immediate family to weigh in publicly on his dad’s potential candidacy. And while he says he thinks his father is “still assessing it,” other members of the family have not been shy about publicly pressuring Jeb Bush to consider a bid.

Earlier this month, his older brother, former President George W. Bush, told Fox News that he thinks “he (his brother) wants to be president.”

“He and I did have a conversation. I of course was pushing him to run for president. He of course was saying, ‘I haven’t made up my mind,'” Bush 43 said in the Fox News interview. “He’s seen his dad, he’s seen his brother. And so he’s a very thoughtful man and he’s — he’s weighing his options.”

“If you asked Dad the same question — ‘Should Jeb run?’ — he’d say yes,” Neil Bush said in an interview with CNN’s Gloria Borger. “Yeah, he would say yeah.”

But not every member of the Republican family is on board with another Bush running for a seat in the Oval Office.

Before the men in the family had begun floating the idea, former first lady Barbara Bush dismissed the notion, suggesting that her family has had its turn governing the country.

“I think this is a great American country, great country. And if we can’t find more than two or three families to run for high office, that’s silly, because there are great governors and great eligible people to run,” she said.

While the former first lady acknowledged that her son is undoubtedly qualified for the role, she did admit, “I hope he won’t.”

“I think he’ll get all my enemies (and) all his brother’s,” Barbara Bush told PBS in January. “And there are other families. I refuse to accept that this great country isn’t raising other wonderful people.”

Despite all of the public clamor surrounding Jeb Bush’s potential candidacy, his son Jeb Bush Jr. admitted that the question hasn’t surfaced during family gatherings, although the issue is “the 800-pound gorilla in the room.”

“A lot of people are waiting to see what Dad does,” Bush said in an interview Thursday with The Wall Street Journal. “There’s a lot of pressure to run.”

Jeb Bush has not been shy about discussing the prospect of a campaign with some of the most important influencers in the hypothetical race.

Earlier this week, Bush was bombarded with questions about a possible run when he met with donors and business leaders in South Carolina, multiple sources at the meeting told CNN.

And while his early visit to a swing state is notable, his travel circuit around the country to raise money for GOP hopefuls in competitive races is also telling.

This week, Bush will travel to Colorado — another swing state — to campaign for Senate hopeful Rep. Cory Gardner, who faces a tight contest with sitting Sen. Mark Udall.