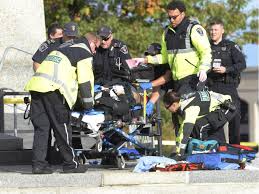 A gunman shot and wounded a soldier in Ottawa and then entered the country’s parliament buildings chased by police, with at least 30 shots fired, according to media and eyewitness reports on Wednesday.

CBC TV said that a suspected gunman was shot dead inside the parliament building. It was not clear if he was acting alone.

Ottawa police said they were actively looking for one or more suspects.

Parliament was locked down and Prime Minister Stephen Harper had left the building safely as police converged on the area.

As the situation developed, CBC News said in a tweeted news alert that more shots were fired near parliament and the gunman was still at large.

Police and tactical teams converged on the area, crouching behind police cars and along fences.

People in downtown Ottawa should stay away from windows and off roofs due to an “ongoing police incident,” the Royal Canadian Mounted Police cautioned in a statement

The wounded soldier was taken into an ambulance where medical personnel could be seen giving him cardio-pulmonary resuscitation.

The shooting comes two days after an Islamic convert ran down two Canadian soldiers with his car, killing one, near Montreal, before being shot and killed by police.

A construction worker on the scene told Reuters he heard a gunshot, and then saw a man dressed in black with a scarf over his face running towards parliament with a gun.

The man stopped a black car at gunpoint and hijacked it, construction worker Scott Walsh told Reuters. The driver got out safely, then the man drove the car to the Center Block on Parliament Hill, where construction work is underway.

The suspected gunman rushed past a woman with a child in a stroller, who ran away screaming. He did not attack the woman or child, Walsh said.

Center Block is the main building at Parliament Hill, a sprawling complex of buildings and open space in downtown Ottawa. It contains the House of Commons and Senate chambers as well as the offices of some members of parliament, senators, and senior administration for both legislative houses.

A Globe and Mail reporter in Center Block on Parliament Hill tweeted that the building was under lockdown after “at least one shooter burst in and opened fire”.

One member of parliament, Mark Strahl, tweeted from inside parliament: “Very tense situation in Ottawa this morning. Multiple gun shots fired outside of our caucus room. I am safe and in lockdown. Unbelievable.”