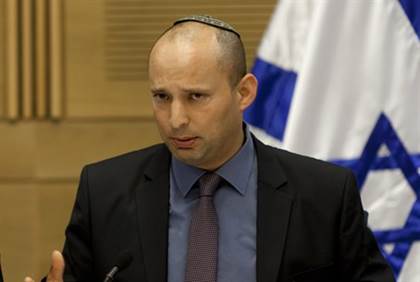 Israelis are turning their backs on the two-state solution in the wake of the recent war with Hamas and it is now time to think about “new models” instead of an independent Palestinian state, according to Israel’s economy minister, who is tipped as a possible future prime minister.

Naftali Bennett, head of the far-right Jewish Home party, said that Israel’s war in the Gaza Strip this summer had prompted a rightward shift among voters that will reflect in the make-up of its next government, which he said would be more “hawkish” than the current right-and-centre coalition.

“What we learnt is that there’s no particular method for preventing missiles being shot at you from a piece of land you handed over to your enemies,” Mr Bennett said. Israel withdrew from Gaza in 2005 and has fought three wars with Hamas since it took power there in 2007.

“The logic that the world will love us if we give up more land doesn’t work,” Mr Bennett said. “Now the Israeli public realises it; I hope that gradually, world leaders and the world will come to understand that everything we thought until now about the notion of a Palestinian state next to Israel is inapplicable.”

The son of American immigrants to Israel, Mr Bennett ran for office in 2013 after a business career in which he co-founded Cyota, a software company that developed a widely used authentification system for banking.

As economy minister he has garnered most headlines for his far-right views, while working with less notice to chip away at Israeli monopolies and promote the country’s flourishing technology sector.

“When you open up your cell phone the flash memory is an Israeli product; in your heart you might have an Israeli stent; the computer you’re using has an Israeli chip; the vegetables you are eating are irrigated with Israeli water technologies,” he said.

Mr Bennett has also promoted trade ties with China, India and other emerging markets at a time when Europe, Israel’s largest trading partner, is criticising it for expanding settlements and abandoning peace talks, which collapsed in April.

John Kerry, US secretary of state, has pressed both Israel and the Palestinians to resume peace negotiations since the end of the conflict in Gaza, which killed more than 2,100 Palestinians and provoked widespread criticism of Israel in the West.
Britain’s Parliament last week voted to recognise a Palestinian state in a nonbinding vote and France and Sweden have signalled recently that they may move ahead with recognition.

Mr Bennett dismissed the growing condemnation of Israel in Europe, which he said was due to “massive” demographic changes there – most notably the rise of significant Muslim minorities. “That’s what they do towards Israel to pander to their voters,” he said.

“There is nothing we can do that would make these places happy,” he said. “The day after we found a Palestinian state we will get clobbered for defending ourselves against the Palestinian state, so what’s the point?”

Mr Bennett, whose party gets its support from “national religious” Zionists, including the half million voters living in Israeli settlements, says he favours annexing the parts of the West Bank Israel already fully controls and giving Palestinians limited autonomy elsewhere.

“I think we’ve entered a new era where we have to restart everything – press the restart button and rethink everything,” he said, when asked whether he supported Mr Kerry’s calls to resume peace talks.

The hardline minister’s remarks come amid signs of growing tension both between Israel and its western allies over the unresolved conflict and among the parties in Benjamin Netanyahu’s government, in which Jewish Home is a junior partner.

Mr Netanyahu has summoned the heads of parties for a meeting on Wednesday to head off a coalition crisis after discord over the state budget and a draft bill on religious conversion. Elections are next scheduled for 2016, but speculation is growing that they may be called sooner.

Recent opinion polls indicate that if a new election were to be held in Israel today, Mr Bennett’s Jewish Home would be the second-largest in the Knesset after Mr Netanyahu’s Likud; Yesh Atid party and Labour, the biggest moderate and left-of-centre parties respectively, would both lose support.

“The pundits say I am the guy who has the most to gain, but I don’t want elections because it’s not good for Israel,” Mr Bennett said. “And I think we are doing an amazing job in the ministry of economy.”

US and European diplomats are expressing growing disquiet over the Netanyahu government’s expansion of settlements and calls by some rightwing politicians to change a delicate status quo, in place since 1967, which prohibits Jews from worshipping on Jerusalem’s Temple Mount, sacred to Muslims as Haram al-Sharif, site of the Dome of the Rock.

The area has seen violent scuffles over the past two weeks, with Palestinians and Israelis accusing each other of provocative acts. Mr Netanyahu has said he has no plans to change the status quo.

“Do I think Jews should be able to pray on Temple Mount?” Mr Bennett said when asked about this. “Yes – it’s our holiest place on earth. We have to act wisely and do it.”